What’s right in front of us isn’t always visible. Collin (Daveed Diggs) is a convicted, African-American felon. He’s served his stint in the local Oakland jail, and returns to civilization on a one-year probation period spent under the watch of a halfway house. His childhood friend, the Caucasian, loose cannon Miles (Rafael Casal), continuously makes things difficult, but Miles’ self-control has led him to just three days away from complete freedom.

When riding home after time spent with Miles, Collin is a witness to an emotionally distressing situation. The exposure to it causes him to reevaluate his identity, his environment, his lifelong friendship with Miles, and their dynamic—all while attempting to not lose his cool and not fall back right behind steel bars.

The city of Oakland may be losing their football team, but they’re certainly not losing for representation on the silver screen. Weeks after Boots Riley used Oakland as a backdrop for his wild Sorry to Bother You, “The Town” factors into the story of Blindspotting significantly more than that film, becoming a character in of itself. Sharing some similarities, Blindspotting is definitely the lesser of the two, but not without some compelling flashes of substance.

First-time full-length feature director Carlos López Estrada is tasked with putting this together. Offbeat would be an accurate description. He uses good utilization of lighting that gives the film a street noir feel, and one particular scene combines rap and lucid imagery that is impossible to look away from. His music video background, often a criticism when talking about music video directors making the jump to full-length features, actually aids parts of the presentation. But this movie feels as much directed by its two lead stars as it does Estrada. Blindspotting is the brainchild of Diggs and Casal, dating back to the mid-2000’s. Not only do they star, the writing and producing is credited to them. 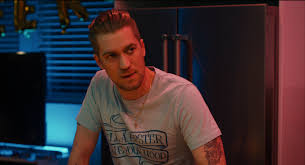 Their movie intersects many hot buttons of today in race, law enforcement, class, environment, and gentrification to name a few. But the overarching theme is identity—seeing something that can be seen multiple ways yet being conditioned to see it in only one way (often in the wrong way); the relative definition of blindspotting. It comes together in the last 30-40 minutes, with a unique climax. Problem is, Diggs and Casal struggle with settling in on the right tone for the first 40-50 minutes. In this period of runtime, Blindspotting is a drama, a comedy, a love letter to Oakland, a Shakesperian/poetry jam presentation, and a mildly surreal movie, and it doesn’t feel great at any one of these. This inability to meld these aspects and put a focus on inconsequential scenes (two scenes like Miles selling stuff for quick bucks does nothing to further his character or the story) makes for a viewing that doesn’t leave a strong lasting impression once the end credits roll.

However, the duo’s longstanding and natural chemistry keeps Blindspotting afloat in awkward periods. Both possess acting history, with Diggs’ resume having more credits to it, including Broadway with the extra-popular Hamilton. He’s good mostly, save for the infrequent instances when his performance seems better in tune for the theater., It is Casal who shines slightly brighter, having the louder of the two parts but proving capable of delivering tapered emotion where called for. Veterans in Ethan Embry, Wayne Knight, and Tisha Campbell-Martin appear but with little to do with the plot outside of Embry, a police officer who instigates Collin’s self-analysis of his situation, and he serves more as an idea than a character.

It is not without some blind and rough spots in the presentation. Nevertheless, Blindspotting is another different offering during a summer blockbuster season for those not looking to repeat viewings revolving around globetrotting espionage destruction, animated monster vacation tales, or endless ABBA tracks.