“They say open road helps you think about where you’ve been. Where you’re going.”

Going into Furious 7, it would be wise to heed the advice once said by Luke Hobbs (Dwayne Johnson) to his special forces team in Fast Five: Make sure you’ve got your funderwear on. London’s successful mission in bringing down Owen Shaw has brought Dom (Vin Diesel), Brian (Paul Walker), Mia (Jordana Brewster), and Letty (Michelle Rodriguez) back home to Los Angeles with clean slates. The narrow escape of the past “adventure” provides realization to all involved: It is time to leave these lives behind…

but Deckard Shaw, (Jason Statham) brother of Owen, will not allow that. Driven by vengeance, Deckard will not stop until every one of Toretto’s crew is lying six feet under. There is no choice but to bring the gang back. Getting to Deckard isn’t a easy task, and to do so the gang is going to have to play along with a mysterious government official known as “Mr. Nobody” Frank Petty (Kurt Russell) to retrieve a powerful program that is deadly in the wrong hands. Dom, Brian, and company are going to need every bit of their family bond to survive this one. 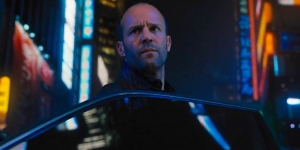 November 30th, 2013. That is the day that Furious 7 became more than just the seventh installment in one of cinema’s highest-grossing franchises. On that day, Paul Walker sadly passed away, and F7 became one of the most talked about, analyzed, and scrutinized movies leading up to April 3, 2015. What would the studio do? What should they do? Should Walker be replaced? Should production even continue? It is almost impossible not to think about the circumstances involving this movie, and the movie doesn’t necessarily make the viewer forget them either for that matter, but Furious 7 should be most of what fans desire: Unfathomable action, quality time spent with its universe’s characters, and a tasteful and deftly executed sendoff for Paul.

Since the series-altering shift in Fast Five, what exists in the scripts of these films serve as just enough glue to connect wildly entertaining sequences to a plot. F7 presents a compelling setup with the common but tried and true revenge angle, and that never truly leaves the duration of the film.

But, it does take a backseat to the A plot. Without spoiling too much, there is a lot of globe-hopping and more opposition than ever before, but with that, some rough edges are found. Perhaps they are present because of the reported rewrites that came about because of the tragedy, which no one could have planned for. There’s a feeling that may be had that everyone did the best they could with the circumstances given, plot included. It isn’t a shoddy one, per se, but more disparate than I would have liked.

What does hold the “over here, over there” plot together however is the theme of family, both in the world these characters live in, and in the real one. Even through the most ridiculous stunts, family links exist, and have only become stronger with each installment. Never once is there doubt that these characters wouldn’t put their lives on the line for each other (getting to seven movies will do that), and never once is there doubt that Vin, Michelle, Paul, Tyrese, Jordana, Dwayne, and Ludacris aren’t legitimately enjoying each other’s company. This gives some of the dialogue (not the corny but highly entertaining one-liners) about sticking together and realizing what is important more emotional heft, amplified by a score composed by longtime F&F music contributor Brian Tyler. It is fourth-wall breaking in a sense, but not bludgeoning to the point where it becomes the sole mission of the movie.

Walker’s untimely demise usually found its way in any talks about Furious 7, but what went under the radar despite being just as important is the new face driving behind the directorial seat. Justin Lin’s four movie run ended with F&F6, and in steps perhaps the most popular producer and director there is today in horror: James Wan. The result is pretty good for a guy who’s only real exposure to action was Death Sentence, and that is nowhere near the action levels that F7 possesses.

Wan does a lot of solid things, one of them being (with the technical crew) the difficult task of having to complete Paul’s scenes with CGI and voice-over. To be honest, yours truly hardly noticed where the real Brian and the produced Brian were. Sure, an educated guess can be made where Wan and company had to work a little harder. Some scenes choose to linger entirely on other characters while Walker is speaking or use really quick cuts as to not linger on Walker’s visage, but as a whole, especially in the action, a magnificent job is done integrating what could be a hindrance seamlessly.

Wan excels at showcasing the all-out, vehicular mayhem and wide-scale insanity that Lin perfected with each subsequent movie, and it is even possible that he may have Lin beat in this arena. But from a pure hand-to-hand comparison, he lacks the expertise that Lin brought to the table. There’s a lot of rapid, somewhat odd camera angles with some of the clashes, which doesn’t totally dull the fistfights, but it removes some of the visceral impact they could have. Most directors don’t immediately come equipped to capture action right away, especially in a blockbuster. He’ll get better, because he isn’t bad to start with. 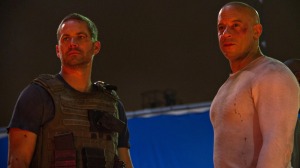 Enough has been said about the returning characters. Not much is different with them, which can be good or bad depending on your point of view, although there is a well-crafted arc with O’Connor that is developed from the beginning and earned. It can be wondered if the rewrites took screentime away from Dwayne Johnson, but being the persona he is, his presence is still felt. As for the notable newbies, Statham may be the best definitive villain in the entire franchise, but he really only appears when convenient. Djimon Hounsou is a standard bad guy in what may have been the role Denzel was offered. Wherever the franchise goes next, Kurt Russell looks to be a substantial cog. His character is an interesting addition.

Furious 7 marks the end The Fast and the Furious franchise. Not literally speaking of course, with the money to be made with this one, but figuratively and spiritually. There’s a finality that exists amid the spectacular crashes, humorous one-liners, and death-defying stunts. Furious 7 goes out the only way it knows how to: By riding out together.