Hear ye, hear ye. Born in a brothel, the streets of Londinium has become home for young Arthur. The streets have molded him into a tough, confident, yet still honest individual who does the right thing more than not. Now older, Arthur (Charlie Hunnam) gets by as a Robin Hood-esque character of sorts, providing for his hometown what they need and dispensing justice where applicable.

One particular incident puts Arthur in the path of King Vortigern (Jude Law), who has ascended to the throne via treacherous means. Knowing of Arthur’s royal lineage (unbeknownst to Arthur, he’s the son of the deceased king Uther (Eric Bana)), Vortigern looks to exterminate him. Wanting no part of this, Arthur so wishes to go back to his normal life, but he who has the strength to draw the fabled sword Excalibur from the stone must use it, and topple Vortigern once and for all.

Unless you’re The Lord of the Rings or Game of Thrones, medieval/Middle Age/mythology movies and productions have a tough go at drawing audiences to the theaters, at least here in America. From a critical perspective, they might as well be poison in most cases now (see Seventh Son, Clash of the Titans, Warcraft), with people often making up their minds as to the actual quality of them and refusing to be wavered in thinking anything different. Most aren’t great, but every now and then the genre is fresh enough to deliver some legitimate fun. Enter the latest telling of King Arthur. By no means amazing, King Arthur: Legend of the Sword ends up being, all in all, an energetic summer movie.

Holding the directorial sword in King Arthur rebooted is Guy Ritche. Ritchie is an individual who brings a noticeable imprint to any movie he does, and that doesn’t really change here. Expect a whizzing, hyperactive camera to intercut whenever characters deliver exposition, or give context to (what is supposed to be) pertinent information. It isn’t nearly as funny as Ritchie thinks it is. This style doesn’t 100% work in the movie, but does keep the energy up, and sort of makes up for a story that can feel stretched at times, especially in the latter third before the climax.

However, from an action perspective, Ritchie’s style does work in the world that King Arthur: Legend of the Sword is composed of. The 180 pans, stop-start shots, and the like just goes well with all of the magic and supernatural elements. Save for some questionable CGI near the end that stands out in a negative way, there’s a real sense of “epicness” that Guy brings to the proceedings in various scenes. But, the real MVP of Legend of the Sword may be composer Daniel Pemberton (Steve Jobs), who creates a standout score that goes against sonic genre type and truly elevates the film.

Only two characters really receive proper attention and development in this King Arthur fable. Of course, one is the titular character portrayed by Charlie Hunnam. Arthur is a little more grittier and less proper in this retelling, and Hunnan is the perfect fit, providing physicality yet everyman likability to make a character worth rooting for. His opposition is played by Jude Law, clearing having a good time while getting some scenes to showcase his range and flesh out his despicable king.

As the supporting cast goes, the enigmatic Mage (Àstrid Bergès-Frisbey) is the most intriguing individual; there’s a lot of potential with her if future movies come to fruition. Unfortunately, most who make up the fabled knights of the roundtable come off as generic spacefillers, even Djimon Hounsou. At least he’s not playing a secondary antagonist like he’s been doing as of late (Furious 7, Seventh Son, The Legend of Tarzan). 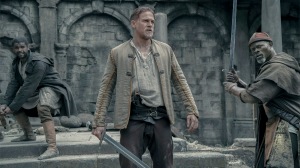 After the financial performance of King Arthur: The Legend of the Sword, it may be long time until the sword is removed from the stone again. Though far from perfect, it’s a shame. I for one, wouldn’t mind seeing another Excalibur stab taken at expanding this tale.

7 thoughts on “King Arthur: Legend of the Sword”