Still waiting on that #JusticeforHan…but we’re getting there (slowly). After thwarting Cipher’s plans, former DSS Agent Luke Hobbs (Dwayne Johnson) and mercenary Deckard Shaw (Jason Statham) return to their respective lives. Meanwhile, another threat rises in the form of a lethal, “Darwinism” virus that, if released, will exterminate the weak of the weak of humanity before rebuilding them into synthetics.

Trying to delay the inevitable is MI6 agent Hattie (Vanessa Kirby), who is framed by cybernetically enhanced super-terrorist Brixton Lore (Idris Elba) after stealing the virus. Brixton’s organization that has outfitted him will stop at nothing to get it back. He’s the apex alpha that can’t be defeated by one man. Which is why two alphas, despite their dislike for one another, stand the best chance of taking “Black Superman” down. 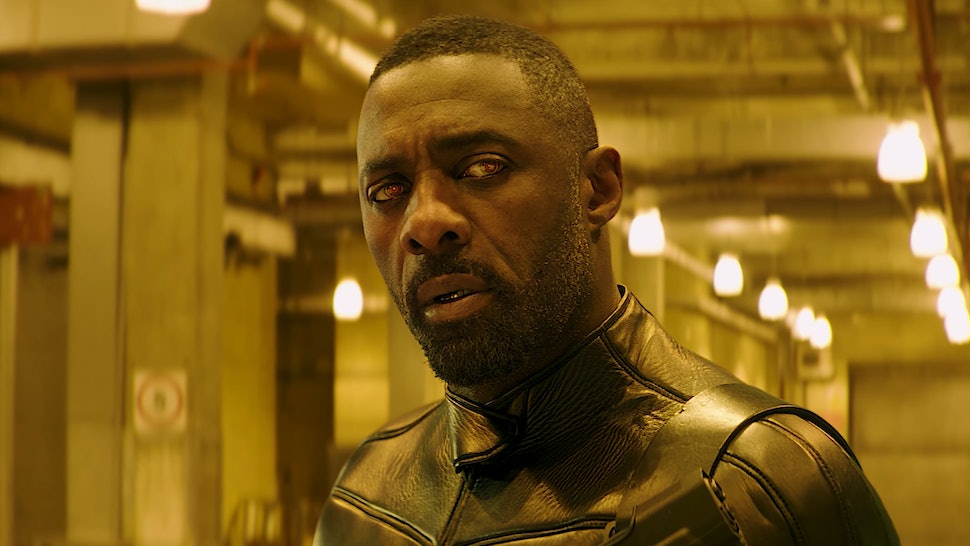 Regardless of whether we’ll ever see true justice for a beloved Fast and Furious character or not, it’s close to assumed fact that the best aspect of the bombastic and beyond bloated eighth installment known as The Fate of the Furious was the conjoined dynamic Johnson and Statham brought to the proceedings. So much so, that an end credits teaser that would have crystallized the Hobbs & Shaw future in the envelope of F&F was axed by executive producer Vin Diesel in what can be looked at as a final act of pettiness after a prolonged feud with The Great One. This will not be the first nor the last time that you’ll read “Hobbs & Shaw is exactly the movie you thought it would be.”

The primo mileage out of this one may very well come down to how much a movie goer enjoys the steady one-upmanship the characters Johnson and Statham deploy on one another. Whether it’s making not-so-subtle and subtle jabs on each other’s manhood/lack thereof, or totally being unimpressed with how the other handles business, above all Hobbs & Shaw is a buddy-cop movie and the on-screen chemistry of the two action stalwarts is special. The electricity the two possess largely keeps the spinoff, way lengthier than needed, amusing. They’re not alone in cast support. Although he’s nothing more than a #2 to the true big baddie, Elba calibrates his performance into the appropriate tune, and Kirby looks poised to return if she wants to as the only current female of note. Two prominent cameos appear, one inspired and another probably sucking up too much screen time to be considered one. Huge unanswered question: Where’s Owen Shaw?

Beginning with Fast & Furious 6, the F&F films have an affinity for using something just barely above a MacGuffin that is explained by being dangerous in the wrong hands (Nightshade, God’s Eye, EMP device) to serve as the crux of their plots. That’s Hobbs & Shaw as well; a mix of M:I2 and Mass Effect 3‘s synthetic/organic storyline (Perhaps future follow-ups will continue to lean into sci-fi?). And it wouldn’t be at least a little connected to everything without an underlying theme of family, making amends with those who share literal bloodlines.

As the decade draws to a close, there have been a few directors that can be credited with pushing the action genre forward. One is Chad Stahelski of John Wick fame, and another is the person that was uncredited in the movie that assisted in bringing Baba Yaga to life in David Leitch. If the trailers indicated — read, spoiled — anything, it was that the improbably wild set pieces are here to stay. It’s about as good as a CGI-heavy actioner can be, captured with the good stuff in frame as opposed to out of it. Having two distinct characters with different approaches and fight styles gives a little more intrigue and creativity to all the outlandish stuff.

Hobbs & Shaw, while sharing many strengths and weaknesses of what it’s being spun off from, ultimately lives on the outskirts of the billion-dollar franchise. That’s actually a good thing. If Johnson & Statham’s tag-team effort proves but one thing upon conclusion, it’s that there’s likely more fun left in subsequent follow-ups featuring the ice-cold can of whoop-ass and the champagne problem than there may be with the original family.