The mind is often known as the first thing to go. The elder Anthony (Anthony Hopkins) has been fighting the decline of his mind that is exponentially becoming worse and worse. He is at home in his British flat where his daughter, Anne (Olivia Colman), has primarily been taking care of him. Anthony despises this, believing to be quite capable of taking care of himself. It’s not his memory failing to recall where he put that watch, it’s the many other past caretakers who have stolen from him. He needs help.

Anne has had enough. She has informed her father that she’s leaving for Paris with her new love, Paul (Rufus Sewell), and is hoping that the latest caretaker, Laura (Imogen Poots) can put up with Anthony’s mercurial temperament. Anthony and Laura truly vibe, but it is Anthony that cannot quite make sense of what the days are, where they take place, or who inhabits them.

One of the most depressing things about getting older is—if one is still blessed to have at least one around—is seeing your parents get older. At one point, they were probably looked at in awe, with little or perhaps nothing impacting their health. And then, gradually over time, you see them start to lose physical steps, maybe mental too. It takes longer for them to recover from mild afflictions. All that is nothing compared to living through a loved one’s trek through dementia, which The Father exhibits in agonizing detail from the afflicted person’s point of view, but it is also a phenomenal story of coming to terms with the natural devolution of a loved one’s declining state of health.

Renowned Frenchman playwright Florian Zeller serves as the director of this movie, which is adapted from his 2012 play of Le Père. The Father 2020 happens to be Zeller’s debut behind the camera, and it is hard to tell. For a work that takes place in predominantly one area (there are a lot of similarities between this and Ma Rainey’s Black Bottom, the movie that possesses Hopkins’ strongest competition for Best Actor in Chadwick Boseman), the aesthetic never gets dull, and it absolutely is its own character in the story. As great as Zeller is, the editing by Yorgos Lamprinos should not go unnoticed. Success wise, the very nature of the feature is as dependent on his A+ work as it is on the cast.

The detail present in The Father is impressive. With it being his creation, Zeller obviously is credited as a writer and the film only benefits from having its adapter directly involved in the conversion from stage to silver screen, but occasionally, stage plays stumble in their translation to movies because of the dialogue stiffness. Zeller shares co-writing duties with two-time Oscar winner Christopher Hampton, and one of the best things among many in this work is how natural and realistic conversations sound, both in actual content and delivery. Acceptance is the theme of the movie, whether it is one person resisting their situation or another arriving to a necessary space of resignation. Eventually, we all get to the same place, with the only difference being how fast we get there. Save for an unnecessary moment showing physical abuse, there are no missteps in this script, and it is a surefire nomination for Best Adapted Screenplay.

Speaking of no missteps, there are none in the cast. Buzz has been high around The Father housing Hopkins’ career best performance. After viewing, that buzz is very legitimate. This is certainly not an easy role, and it calls on the elder statesman to be funny, abrasive, hazy, angry, and more. He is impressive throughout, but it is the last five-to-ten minutes that are likely to leave people in awe and heartbroken, where his character himself seems to understand his plight. Colman’s efforts are praiseworthy as well, struggling internally and externally with guilt as to whether she can do more for her father or is killing herself slowly by not living her life. Intertwined in their contributions to the movie are Poots, Sewell, Mark Gatiss, and Olivia Williams. Each’s part is fairly small, but each member of the cast leaves an impact on the overall story. 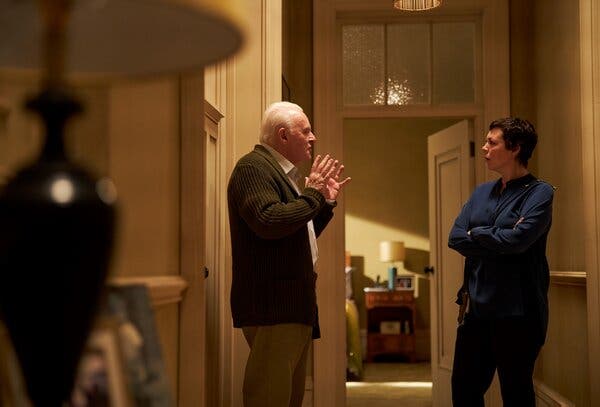 An excellent film on so many levels, The Father is a sobering yet special reminder of life’s natural circle. It will likely go down as the truest depiction of dementia from an internal perspective.