What movie is surprisingly coming up on an official ten-year anniversary? That would be Warrior, a family-focused drama interwoven within the world of mixed martial arts…or vice versa. The film sees Tommy Riordan (Tom Hardy) once a celebrated prep wrestler, return to his hometown of Pittsburgh after time spent in the Marines. Reeling after a difficult incident and addicted on pills, he seeks out his recovering alcoholic father, Paddy Conlon (Nick Nolte) of whom he has not forgiven for not being present when he and his now estranged older brother, Brendan (Joel Edgerton) needed him the most. While his father might have been unavailable emotionally, he was there for Tommy as a ruthless trainer. Wanting to enter an upcoming MMA 16-person tournament known as Sparta that will pay the winner $5 million, Tommy begins on the path to winning it all.

Meanwhile, Brendan makes a living as a high school teacher with wife, Tess (Jennifer Morrison) and two daughters in Philadelphia. He was once a pro MMA fighter who has given that up, except on the weekends. He fights now in ballroom brawls to accumulate more money, as he will lose his home if he doesn’t come up with enough cash in 90 days. After his school finds out about his extracurriculars, Brendan has no choice but to go all-in on fighting again, and his path leads him into the tournament, unbeknownst to his brother. Here are 5 reasons why it’s time you watch Warrior (if not done already):

When it comes to MMA, yours truly could care less about the sport and has never really found it all that watchable. What’s the intrigue in potentially seeing an entire five-minute round consisting of ground maneuvers? The sweet science of boxing has always captivated me, and I believe that a great boxing match can rarely be topped in the hierarchy of sporting events.

Nevertheless, boxing movies tend to have a familiar formula, whether that be an estranged family, a rise/fall/rise arc, complete underdog, etc. And Warrior isn’t necessarily different in that regard—in fact, it combines all three of those aforementioned staples—but it most certainly is not a boxing movie. Choosing to move those story beats into a caged setting does give this genre movie a very fresh coat of paint. It is an elevated Bloodsport without the flash death of the Kumite. The cage also serves as a boiling point for the events found here: Everyone has been running from each other for so long, but the cage demands that issues be resolved here, because there is no escaping its enclosure.

Fighting movies are usually comprised of bombastic tracks to reflect the highs and lows of putting it all out there and digging deep when there’s nothing left, but the best scores (looking at Rocky and Creed) use their quiet scenes to build emotion and introspection. Composed by Mark Isham, the music in Warrior does much the same, relying on swelling compositions during fisticuffs and leaning on classical cuts (Beethoven is big in the script for one fighter) to mellow out viewers. 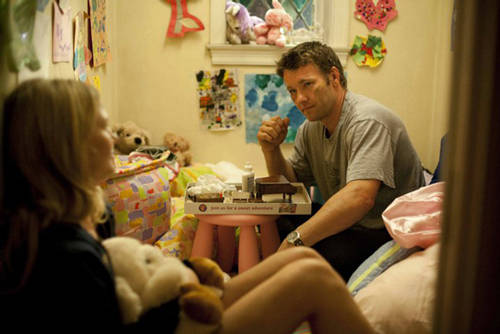 Scriptwriters Gavin O’Connor, Anthony Tambackis, and Cliff Dorfman seem to know there’s no way to really surprise an audience as to what lies ahead in the climax. So, they don’t even try. However, they put a lot effort into creating legitimate reasons for why each brother not merely wants but needs to compete in Sparta, and when the inevitable happens, neither person is fully painted as the face or heel. They are just humans attempting to fight through their traumas and look towards the future. The connective tissue between both is being highly impassioned (Tommy suppresses whereas Brendan expresses), and their troubled relationship with their father, Paddy.

In their fights, the bouts they go through are representative of their upbringings and styles. Tommy relies on brute force and knockout power to end his clashes within seconds (think a cross between Brock Lesnar and Mike Tyson), while Brendan is the classic gritty grinder, who is not gifted athletically but is gifted with high situational IQ and the ability to take unfathomable punishment and still stand. Styles make fights.

If you’re going to make a fighting film, it must deliver on the fighting part. There’s a visceral element to what O’Connor displays, and it is all the more impressive that Warrior is PG-13 rated and not R. In some similar genre films, there can be an overreliance on slow motion to “up the ante.” O’Connor is pretty restrained here, trusting the flow of the movie to sell the impact. Main fight choreographers J.J. Perry and Sam Hargrave have to be praised for their role in making these feel authentic, as do Edgerton and Hardy for undertaking significant conditioning programs and putting their bodies on the line.

As many testosterone vibes it puts out on its poster, Warrior is an emotional drama first and foremost, and the cast sells this. We can start with Nolte, who was rightfully nominated for Best Supporting Actor and perhaps channels his own personal life struggles into the character of Paddy. He isn’t front and center, but he is undoubtedly the central point of the feature and arguably the most important person to it. Despite dealing with the thinnest sketched characters of the main cast, Morrison and Frank Grillo manage to leave strong imprints on the movie.

And then there’s Hardy and Edgerton. It’s kind of cool to see and remember Hardy before he became memed as Bane and in subsequent things. As far as pure unbridled intensity goes, this is up there with his turn in Lawless. As for his counterpart, Edgerton feels chronically underrated despite having a strong and diverse filmography resume. He’s always the guy that isn’t necessarily the most charismatic or uber-performative, but he is almost always in command of his characters and that is no different in this movie.

Warrior is currently on Hulu.