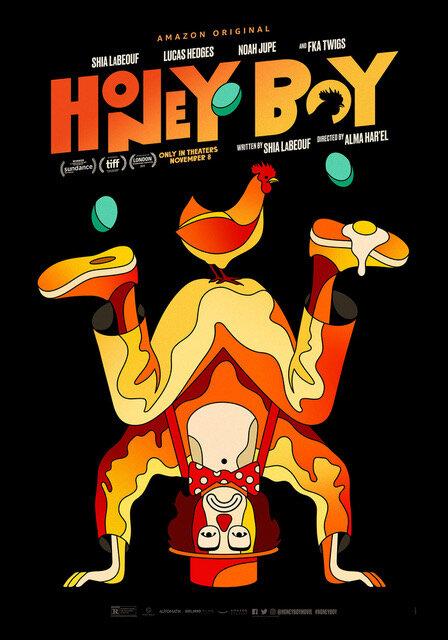 It has often been said that the only normal aspect of a child star’s life is when they are acting in front of a camera. That definitely applies to twelve-year-old Otis Lort (Noah Jupe), making his way in showbiz with his domineering, volatile father James (Shia LaBeouf) flanked by his side serving as his de facto manager. James is a failed rodeo clown and husband who projects many of his frustrations onto his son.

Strong talent cannot be stopped, and despite his turbulent home life, Otis becomes a name in Hollywood, but not without his own troubles and demons that lead him to rehab. Here, he must confront the realities that he has buried and suppressed for so long to get back on the straight and narrow.

LaBeouf is something. He is often shown to be eccentrically chaotic, having no problem flying off the rails in his personal life. He is passionate, and this passion has often bled into his thespian career. His presence is undeniable, whether he is working with a simple yet stellar story in, say, The Peanut Butter Falcon, or something more…indulgent in Honey Boy. Written by LaBeouf who was inspired by his own troubles, the movie is insightful into his life while simultaneously being laborious to watch.

Making her full-length feature debut as a director is Alma Har’el. Her direction toggles between 1995 and 2005, with perhaps the coolest aspect being how she makes references to LaBeouf’s life and past film vehicles (i.e. Transformers) without explicitly naming them. One of the problems in Honey Boy isn’t the way the two time periods mesh together (they do so quite well), but that 1995 hooks more than 2005, which is told from a rehab house with the sole purpose being to frame 22 year old Otis’ current predicament around his 12 year old life.

Watching Honey Boy brings one recent movie to mind dealing with turbulent teenage drama in Beautiful Boy. That feature too had strong actors in Steve Carell and Timothée Chalamet carrying an über depressing story of recurring addiction. It is not that Honey Boy and Beautiful Boy lack a powerful or moving scene, but even the heaviest stories typically feature the occasional counterbalance of levity or reason for them existing to build to a respectable resolution. Otherwise, their impact in totality dulls after a while. That is the realization had about midway through with Honey Boy, a lather, rinse, repeat movie of sorts for much of its runtime.

As can be expected, LaBeouf throws his all into this role as he is wont to do, clearly working from a place of firsthand familiarity. Jupe passes well for a young LaBeouf and continues his run as one of Hollywood’s great youngsters. The person who is left out to dry is Hedges, shown to be plenty talented in prior roles, but an afterthought here. He has little to work off of outside of setting up the script to funnel back to 1995, and his look is vastly different from LaBeouf to the point that it unfortunately does draw a viewer out of the film.

Honey Boy is the type of film that probably would be better if it were not one. All the content here feels rife for the written book self-memoir treatment that Oliver Stone recently authored in Chasing the Light: Writing, Directing, and Surviving Platoon, Midnight Express, Scarface, Salvador, and the Movie Game. LaBeouf writing his own memoir? Sign me up. Him writing a 90-minute fictional movie heavily based on his life? Not the same effect.