It’s a Mortal Kombat world, and we’re all just living in it. With the heavy life behind last year’s still trucking Mortal Kombat 11 in newly released DLC (Aftermath), animated movie (Scorpion’s Revenge) and a tentatively scheduled March 2021 reboot, the franchise of MK will never be killed. It would be easy to forget we are nearing the 25-year anniversary of the movie based off the blood-soaked video game that essentially created the ESRB. What better time to look back at 1995’s Mortal Kombat?

THE STORY: In this fictional world, world domination must be earned, not given. How? An ancient tournament known as “Mortal Kombat” that occurs once every 30 years allows each Realm to put forth their best fighters in the endeavor. Should 10 straight wins in the tourney happen, a Realm can forcibly invade another realm and take it over. WHAT TO LOOK FOR: Is Mortal Kombat a quote on quote traditionally good movie? No. Even for 1995, a large chunk of the computer-generated imagery is mediocre at best, bottom-barrel Microsoft Paint quality at worst (the Reptile scenes are…something). So many performances are the textbook definition of wooden, it is telling that most who appeared in the movie never had the long careers in Hollywood. However clear the reasoning behind it is, something does seem off with the rating only being PG-13 for such an infamous video game. And, the story itself takes a little while to get going in an exposition heavy focus. These are not exactly the type of characters/people who can carry such a task.

All that said, Mortal Kombat is a quote on quote good—no, very good—video game movie. Once the fighting comprising predominately the entire second half gets going, the movie finds a groove. Unlike, say, Super Mario Bros., there’s respect to the source material and a desire to adhere to what it is, which is in this case, fighting in a tournament with supernatural forces. Nothing but kudos should go the way of director Paul Anderson and the many stuntmen/women & fight choreographers, one being lead star Shou. There is a grace and fluidity to all the bouts, not unlike what was seen in an arcade and now a PS4. Bad as the CGI can be, the actual set design and amount of detail put into the costumes is something to note. Wherever one lands on the MK movie, it cannot be said that heart and care weren’t put into it. It possesses soul.

Yes, the bulk of the cast ain’t great, but a few standouts can be found. The late Goddard totally captures the essence of the Australian A-hole, Kano. Ashby taps into what makes Johnny Cage simultaneously douchy and a guy you wouldn’t mind being friends with and begrudgingly respect, having all the talent in the world to back up a smart mouth. But it is Tagawa who stands as a hefty reason why Mortal Kombat is remembered and appreciated with a modicum of frequency. He is delightfully devilish with glee as he repeatedly takes souls of fallen combatants and peers over the entire proceedings with a measured, attentive eye. So good, that when NetherRealm Studios wanted to bring back Shang Tsung as a DLC character, they used the entire likeness of Tagawa’s rendition. 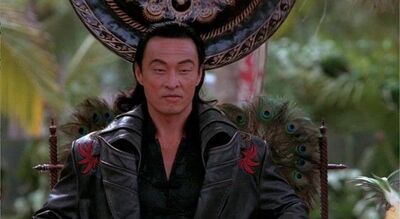 A GREAT MOMENT: Johnny Cage versus Scorpion, no doubt whatsoever. Starting in the vastness of a forest and eventually moving to Scorpion’s Lair (aka Hell), it is an even, free-flowing fight that feels close to, if not the most, visceral encounter of the film. Plenty of medium wide shots show the impressive skill and work Ashby and Casamassa put into their preparation, and the close ups add to the horror-like elements of the fight. Top it off with a tongue-in-cheek Easter egg, and it is pure bliss.

THE TALLY: Mortal Kombat will rightfully never be considered a Flawless Victory of a movie, but for the subgenre it represents, it is quite entertaining, even good in respects. Well done. It is What to Watch.