Open your eyes. Moving from Iran, the Naderis now reside in the United States. Babak (Shahab Hosseini) and Neda (Niousha Noor) are attempting to build anew with a new baby in tow. Still, an underlying unease exists between the two from their pasts that slightly bubbles at a friend’s house and becomes heated during a ride home. It gets so bad, the two cannot make it home and settle on crashing the night at a local hotel….the Hotel Normandy.

Before they even set foot to get a room, they’re accosted outside by a creepy homeless man (Elester Latham). And then, an elderly receptionist (George Maguire) who is all too quick to rattle off the morbid things he has experienced in his lifetime. That’s merely the beginning. The Night is going to be a long one that will force all secrets between Babak and Neda to come into the light. 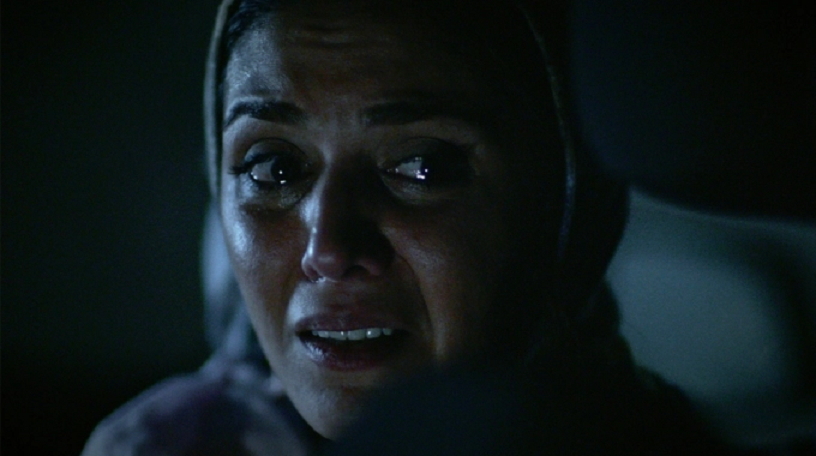 If one has been paying attention, IFC and its division of IFC Midnight have built up quite the equity in the moviegoing/watching circles. It is funny, they’re older than the pinnacle of indie studio filmmaking in A24 but have less of the cache. Nevertheless, recent movies such as The Rental, Relic, and The Nightingale all show this studio as a creative and supportive avenue for filmmakers, especially of the debut variety. What to make of The Night, IFC Midnight’s most recent release?

The director making his (American-produced and backed) debut is Kourosh Ahari. It is a big deal, as it has been over 40 years since a U.S. produced movie was released in Iran, and for viewers in the states, The Night is predominately subtitled in Farsi. Novelty on both ends, but standout direction is a language that is universal and familiar to all. Homages to The Shining are seen—beginning with a wide top-down shot credits sequence, and the movie benefits from being set mostly in one place. Ahari knows the power the right amount of light can add to a scene emotionally. Alongside cinematographer Maz Makhani and with an assist from composer Nima Fakhrara, The Night carries a perpetual feeling of uneasy uncertainty. Technically, the flick is superb.

Unfortunately, that uneasy uncertainty is paired with a script, co-written by Ahari and Milad Jarmooz, that is lighter on details than it should be, and the final act of The Night finds a film in an odd gray space doing a bit of this and that. Psychological, but not quite as heady as it fancies itself. Supernatural, but not overly so. Marital misunderstanding is the core of which everything spawns off here. Yet others features have done a stronger job at showing conflict and the unspoken skeletons between spouses in a more engaging and story-flowing way. By the time one of the earth-shattering reveals is unearthed, it feels—in an effort to not spoil anything for the interested—overstated, particularly when juxtaposed with the other secret which is treated at the same level.

Small supporting characters portrayed by the aforementioned Maguire and Latham contribute to the unsettling atmosphere, However, they’re inconsequential to the film which is firmly a two-person affair. Hosseini is an A-lister in Iran and you can see why (noted range, handsome looks). That said, I almost wish the movie positioned Noor as the lead with events through her eyes, if only because her character is sympathetic and layered when compared to Hosseini’s, who is either a non-communicative spouse at best or a heartless human at worst.

It is difficult to gather true feelings on this feature, which sports outstanding direction, game thespians, but a tepid script hurting more in the second half than the first. I certainly get excited when I find out a new film is distributed and produced by IFC like The Night. Just wish it stayed on my mind longer than a day.