You know what they say about love, it comes when a person least expects it. Seventeen-year-old Ayanna (Zora Howard) seemingly has things figured out. She’s graduated high school and is off to college in the fall to chase her dreams of being a writer. In the interim, she just wants to hang out with her friends in Harlem and have a fun-loving, hot girl summer type of vibe.

One summer night, her path crosses with Isaiah (Joshua Boone), a grinding, older, and up-and-coming music producer. She is initially reluctant to pursue, but their bond is undeniable and the two embark on a transformative relationship that will re-contextualize who they are and what they’re after.

It’s nearly impossible to view Premature and not see the flourishes of what it’s inspired by. Both of Barry Jenkins’ recent features in Moonlight and If Beale Street Could Talk are seen fairly prominently, as too is Spike Lee’s directorial debut, the New York set She’s Gotta Have It. This is a movie that might not be too dynamic, but it is real as an explicitly mature coming-of-age story.

Bringing this story to life is director Rashaad Ernesto Green, a man who has been quite active in TV directing, not so much films. Perhaps this sophomore effort will change that. As can be imagined, this is a film driven by dialogue, though not as much as one might believe. Many of Premature’s standout scenes hold little to no talking (one taking place in a bathtub is one of the most uncomfortable moments of the year), just the presence of a soothing score from Patrick Cannell and Stefan Swanson. Green’s film is evocatively authentic, colored predominately by cinematographer Laura Valladao. Simply, they puts viewers there in the brownstones, parks, parties, subways, and restaurants of Harlem. 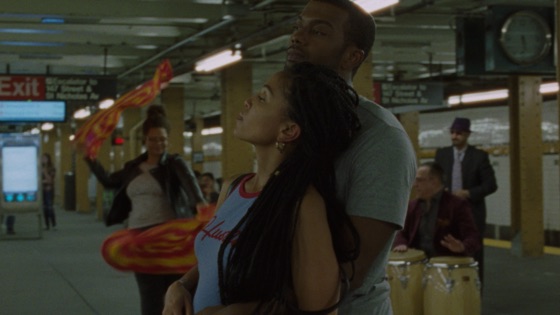 Premature is co-written by Green and his lead, Howard. There’s a marked and successful effort in making and presenting everything as is. Since it is told from the perspective of Ayanna, it is a bit limited in scope, not unlike other coming-of-age stories. Does the relationship move fast? Certainly, but that is a heavy part of the point, that the natural flow of life sometimes follows no structured time frame, especially when dealing with matters of the heart. As far as script issues go, maybe some attention could have been given to the possibly sizable gap between the lovers, as well as a random intrusion of Isaiah’s past lover that doesn’t add to the story or provide meat to Isaiah’s past.

A long cast list—somewhat of a surprise for an indie movie—gives vibrancy to Premature, but as imagined, the focus is squarely on two cast members. We don’t get to find out a ton about Boone’s character, but it’s credit to the actor that he gives him a sense of likability, or at least the ability to see his point of view and why he reacts to a mid-movie situation in the way he does. However, it’s the moving Howard who makes Premature what it is. Howard, a real-life poet, uses her natural talents to forward the narrative through soliloquy, all pieces of herself that spur the ultimate growth her Ayanna goes through, dually beautiful and saddening. At the end of the day, the basic tenet of any romance is strong, believable chemistry between leads, which Howard and Boone carry. On Hulu now, Premature is two things at once. It’s a tantalizing account of what love can be, and the brutal realization of what type of pain love can put people through. Like the highest octave of love, this movie isn’t perfect, but real love sticks with a person. So too does this.