Who would have known in retrospect that 1999 would produce two fairly notable football movies that in some interesting ways have stood the test of time? Any Given Sunday closed the end of 1999, that Oliver Stone flick being extremely prescient and forward thinking with the issues it brought to the forefront. Opening 1999 was a Brian Robbins-directed feature, lighter fare than Stone’s work but certainly not a parody that it would eventually be used as a template of years later. That feature is Varsity Blues.

THE STORY: You already know. In Texas—especially small-town Texas, football is everything. The hopes and dreams of a town lie within the white lines of the gridiron every Friday night. From the moment a little kid steps onto a PeeWee football field, they dream of winning a district championship en route to a state championship. Never mind what else, if anything, they achieve in life. To be on a team revered by your town is life.

The West Canaan Coyotes are seeking their 23rd district title under the leadership of iron-willed Coach Kilmer (Jon Voight) a 35-year veteran regarded as the best of the best. Their best player is signal caller Lance Harbor (Paul Walker), five-star recruit headed to Florida State. Pressure is immense, but this team is equipped to handle it. Only injuries can derail their destiny, and sadly, Harbor suffers a major one that forces Coach to put in his backup quarterback, John “Mox” Moxon (James Van Der Beek). While he’s talented, he doesn’t see football in all or nothing terms as his coach does, probably because he’s one of the few players who has an automatic out of his one-note town thanks to stellar academics that could put him into the Ivy League. Still, being “The Man” is kind of cool. Yet, their philosophies are oil and water and will never co-exist. Who will cave to the other? 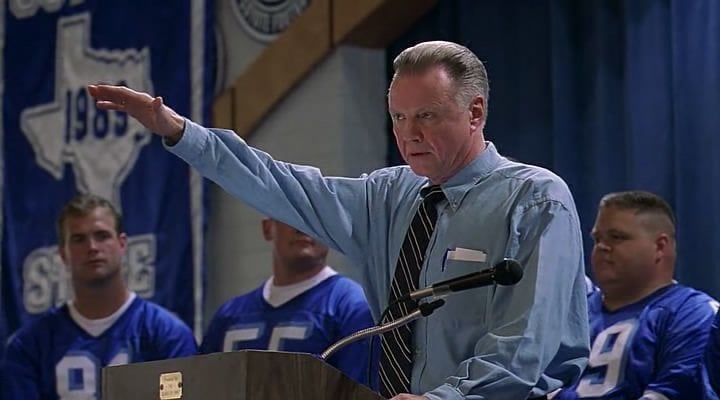 WHAT TO LOOK FOR: Varsity Blues was undoubtedly made for its time period. Akin to, say, The Faculty, it brings together a gaggle of young and attractive cast mates, pairs them with at least one notable seasoned veteran, and places its story in high school. Do not forget the grunge-alt rock dominant soundtrack. So, Varsity Blues is clichéd, sometimes crude for crude’s sake, and spotty overall with its performances (those Texas drawl accents are a hoot). However, there is a lot to find fun with.

First things first, Varsity Blues deserves a glut of credit alone off of fact that it’s the first confirmed high school football film to take place in Texas. Fictional, never mind you, but still, there’s no superior Friday Night Lights without this. Texas prep football is a religion, and writer W. Peter Iliff creates a believable made-up town that serves as what state cities Terrell, Brenham, and the like are during football season, which is crazed, die-hard fanatics. Nothing feels super embellished as long as one can overlook the coach-less last 15 minutes and the immediate end of everyone’s prep careers despite being one of the best teams in the state. Varsity Blues looks and sounds like high school. And as a football movie, the football in Varsity Blues comes off as legit. At least on an athletic level, Robbins and his casting team of Sarah Finn and Bob Krakower picked the right people, and as predictable as it can be, many of the games carry some level of drama for one reason or another.

A GREAT MOMENT: “I don’t want your lyfe!” Must be that moment that has had lasting life as a meme on social media. What gets it to that point? Early in the film, where Lance has yet to go down, Mox’s father, Joe (Richard Lineback) holds a team barbecue in celebration of the season. Joe is the classic grown up who cannot quite put those playing days behind him; he too is tied to Coach Kilmer as he played for him during his prep days. Though he had a bumpy relationship with Coach, he regards those days as the best days of his life. He sees in his son the chance to live his dreams vicariously, maintaining to Harbor’s dad that Mox is a better quarterback. He’ll prove it by showing who has the best pinpoint accuracy, with each father placing an empty beer can on their head that their sons will knock off with a perfect pass. Lance knocks off the can clear, while Mox misses the can and breaks his father’s nose. It is implied that Mox could have done what Lance did, but he, tired of this spectacle, chose to rebel against his pressuring dad and intentionally throw at his face.

Later, as Mox has established himself as a stud, he gets the letter of a lifetime, and it has nothing to do with his newly established athletic prowess. It is to Brown University where he wished to go all along. What should be a joyous family moment is tamped down and undermined by Joe, just minutes before visited by Kilmer who is enraged at this point with Mox calling his own plays. Joe pleads with Mox to recognize the importance of his upcoming game and this season, and all of Mox’s pent up frustration with his father’s myopic view come to the surface with that five word phrase.

Is it acted strongly? Not at all, it is damn near impossible to not at least chuckle hearing Van Der Beek and Lineback use bad accents and tough delivery. But the intent of what Robbins and Iliff were going for works. It’s a very common theme, but everyone can relate to wanting to chart their own path, do things their way, and being frustrated when told to care about something that means little to them. THE TALLY: For an MTV-produced film, there’s been significantly worse out of that studio than Varsity Blues. Some of the clumsiness scores high on the endearing scale, and it’s like a halfback that is shiftier and better than he looks. It is What to Watch.