The family that schemes together stays together. In South Korea, the Kim family—patriarch Ki-taek (Song Kang-ho), matriarch Chung-sook (Jang Hye-jin), daughter Ki-jeong (Park So-dam), and son Ki-woo (Choi Woo-shik)—is struggling to get by in the slums, taking on any job to make some money and one day get out of the basement apartment they live in. A golden gift comes in the form of Ki-woo’s friend, a tutor to a rich family’s daughter who can no longer tend to his responsibilities as he’s leaving for university. Ki-woo’s friend recommends him to the Park family, where Ki-woo passes an “intensive” test administered by Mrs. Park (Cho Yeo-jeong).

Once there, Ki-woo finds that the Park family may be rich, but they’re also incapable of doing most things without hired help. Mrs. Park’s son needs to be coached in art? Ki-woo’s sister can pass well enough. How about a chauffeur for the CEO Mr. Park (Lee Sun-kyun)? Ki-taek is a very adept driver. Housekeeper? What are mothers like Chung-sook for? So, by hook or by crook, the Kim family manages to become something of an unknown Parasite to the well-off Parks. The question is, might the same effect, over time, be had on them? 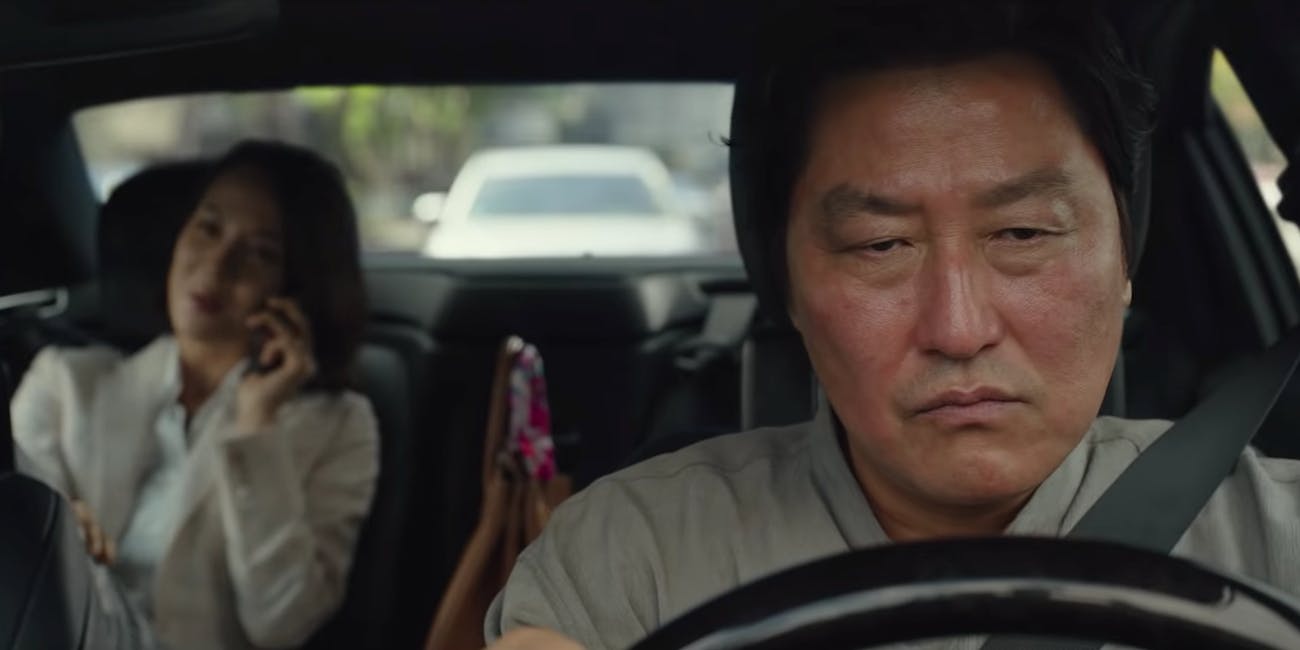 What to make of director Bong Joon-ho’s latest movie in Parasite? If familiar with his 2013 work, the captivating Snowpiercer, that’s a good start. It’s best to go in as blind as possible with this feature, but at least knowing its got a chunk of the same thematic material will provide some general idea of approach. Parasite is truly an abstract painting of which many will find various meaning…or little at all.

At the core, Bong’s latest film is another rumination on class warfare, told as much in the visual direction as the plot itself. Lines, barriers, windows, basements, space, and levels are utilized to define the various divisions the haves and the have-nots possess, even when directly interacting with each other. Perhaps the best usage of this concept is shown between driver Ki-taek and Mr. Park in the automobile. Ki-taek is driving and technically “in the front,” yet he’s never “in the power” or the master of his own fate; he and others like him will always be in the back. This is an interaction that ultimately spurs the last act (specifically, the last 10-15 minutes) to go the way it does. The tone progresses from deadpan comedy to thriller to horror to drama, which means Joon-ho’s techniques change too. There’s never a dull moment.

The meaning of the title Parasite is two-fold. Yes, the basic meaning details the way the Kim family weasels their way into the good life of the well-off Parks, using their ineptitude to leech off them for survival. But as the film progresses, it’s clear that whatever monetary gains and improved status the Kim’s acquire is ultimately a mirage when it comes to freedom and equality. Sure, they’re getting paid handsomely, though at the cost of being miserable emotionally and mentally in a world that constantly reminds them subtly and overtly that they don’t belong. This is the theme of Parasite and it is an interesting one, albeit at the cost of many characters who don’t feel all that realized, whom make decisions that are pretty inept (the entire turning point of the film rests on a rather idiotic choice the family makes in failing to account for all options) in sake of furthering the story to bizarre depths.

Parasite isn’t an cast-driven movie, but a few thespians stand out. Kang-ho’s is awesome, transforming from “Mr. Happy to be Here” to “I’d Rather be Anywhere but Here.” While his character performs some unbelievable acts, they stem from sociopolitical truths and it makes Ki-taek and his character arc powerful and resonant. The other standout is Yeo-jeong, her wide-eyes the perfect representation of a group of people oblivious to everything and everyone outside of their perfectly constructed bubble gifted by society that only a select few enjoy. As a collective, the cast is good, designed to serve the functions of the story and direction mandated by Joon-ho and his co-screenplay writer Han Jin-won.

In life, is there a need for a plan? Joon-ho and Parasite pose that question and would argue no, that our best plan of attack is rolling with the punches and letting things be while being opportunistic where life gives us openings. Sounds a lot like the philosophy credited to Friedrich Nietzsche, right? After viewing, yours truly is of the belief that Parasite isn’t as consistently compelling as that other class-focused Joon-ho production. Even with that said, I’d be lying if I denied that it didn’t burrow into my head like foreign organism likely to stay there for an extended time period.