My Tweets
Posted on July 13, 2019 by MovieManJackson 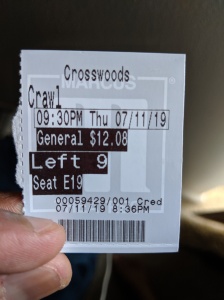 Florida man, inspired by Ant-Man, tries to control alligators with grisly results. The state of Florida is known for a few things; citrus and cyclones are certainly in the top 5. Out in Gainesville, Florida, collegiate swimmer Haley Keller (Kaya Scodelario) has just finished a disappointing practice at the University of Florida. She’s concerned that her scholarship could be pulled with repeated poor efforts. Coming to her locker to change, she’s greeted with a call from her older sister, who’s worried that their father, Dave (Barry Pepper) hasn’t answered her calls. Why? There’s a hurricane coming through, rumored to be a Category 5.

Haley makes the drive two hours up to see if her dad is OK, as it’s possible his emotions aren’t in the best place after a recent divorce. Luckily, she finds him, albeit incapacitated under the Crawl space of their old family home. He’s wounded, badly, but how? That answer is delivered quick when Haley discovers that the rising water levels have additionally brought in alligators who have no issue terrorizing humans.

As mentioned before, it’s nice if every summer has a tight, snappy buddy cop flick in the vein of The Nice Guys. Every summer could also use a “good” monster/disaster movie that appeals to the lowest common denominator part of our brains that even the most high-minded of moviegoers possess. To varying degrees, recent summers of yesteryear have had that, mainly in the revitalization of shark movies (see: 47 Meters Down, The Shallows, The Meg). We’ve got our fill of sharks (don’t tell that to the impending 47 Meters Down sequel), time to try gators in a similar format.

The premise screams SyFy film. But, spend a few minutes with the production and it’s clear this did deserve a national release. Card-carrying Splat-Pack director Alexandre Aja (The Hills Have Eyes, High Tension) helms a rather tame horror feature when held in comparison to his prior works that were often laden with bloody carnage. Crawl certainly has its moments of gore, but overall, it feels like a more measured approach from Aja aesthetically. No, real gators were not used in the making of the film, and the CGI cost used to make them from a piece of a reported $13.5 million budget does look a little wonky at times out in the open. Wisely, Aja often obscures them in deep waters, taking from the ol’ “don’t show too much of your monster(s)” playbook. Perhaps Aja’s best achievement in Crawl is nailing the feeling of being left for dead in the dead-eye mayhem of a Category 5 hurricane. I’ve never been in one, but I imagine that it would be much like what is showcased here. There’s an argument to be made that this could have benefited from a three-dimensional release.

Writing brothers Michael and Shawn Rasmussen are tasked with filling this lean premise out to 87 minutes. One can tell it’s a bit of a struggle for them to do so. Interspersed in periods where the heroes rest and ponder their next move is clunky dialogue designed to give context to the relationship Haley and Dave have to this point. It’s a commendable effort, though odd in its occurrence during a natural disaster of this magnitude. Odd is a solid descriptor for the actions many of these characters take in Crawl; the ones designated as fodder aren’t exactly imbued with average reasoning skills. Regardless, their decisions lead to Crawl’s dark humor vibe. Seeing five alligators circle and feast on a poor buffoon’s body is one of the summer’s funniest visuals.

It helps that Scodelario and Pepper seem to have the right level of awareness for this thing. They’re not so great at selling the awkward family dialogue, but they’re both equally great in selling physical and emotional pain in the way of grunts and screams, of what happens to be a lot of what they’re asked to do. The armor buffs they–as well as Sugar, their dog—carry in taking damage and being able to persevere through it all are on par with any superhero or Fast and Furious movie. Not to mention, the ability to outswim multiple gators, punctuated by an amazing and hilarious pep talk from Pepper to Scodelario (You’re faster than they are!) in what is Crawl’s full-circle redemption moment.

In a summer that mostly has been stormy clouds of energy-less, underwhelming films commercially and critically, Crawl surpasses the lowest of expectations and proves to be a pleasing creature disaster feature. It won’t change the financial outlook on the year, but at least it’s a brief ray of sunshine.