Death, taxes, and Disney live adapting old childhood stories. It’s Christmas time, and Clara (Mackenzie Foy) holds a heavy heart. The holiday simply isn’t the same without the presence of her late mother, a famed inventor. Before her passing, she left each one of her kids a gift. For Clara, that gift happens to be a trinket with a written promise from her mom stating that what’s inside is important. Problem is, Clara needs a key.

Following a golden thread leads her to it, which is a gateway to a world that is made up of bizarre beings and characters, including a Mouse King, a Sugar Plum Fairy (Keira Knightley), a Flower Realm King (Eugenio Derbez), a Snow Realm King (Richard E. Grant), and a Mother Ginger (Helen Mirren). Clara’s introduction to this world comes at a precarious time, a time in which the three realms are teetering on imbalance and the fourth realm threatens to assume all power. Unbeknownst to her, Clara is part of royal blood, and returning this land to a state of tranquility is up to her and a newfound nutcracker ally in Phillip (Jayden Fowora-Knight).

After Halloween, nothing matters but Christmas (I personally love Thanksgiving, but I digress). For those ready to hop right into the spirit, Hollywood is dropping a one-two combination of age-old season tales in successive weeks, beginning with The Nutcracker and the Four Realms. Not counting the 2010 disaster that was barely even released in the United States know as The Nutcracker 3D, the story of an inanimate toy becoming sentient and transforming into a prince has never really received wide release silver screen treatment in a live action presentation. Maybe there’s a reason for that, as The Nutcracker and the Four Realms doesn’t kick off the season on the right foot.

Over the years from a purely technical standpoint, Disney’s production team, editors, and respective directors have been superb at converting these generational and often cartoon-originated tales into legitimately impressive live action movies, peaking at this point in time with the eye-popping environment that was The Jungle Book. With The Four Realms, their latest into the endeavor is their weakest collective offering. Co-directed by two men who are no scrubs in the industry in Joe Johnston and Lasse Hallström, the entire package is not without some solid set design and costumes. Mostly, however, it comes off as extremely lifeless. A visually magical story such as this one that should be inspiring awe instead inspires apathy. 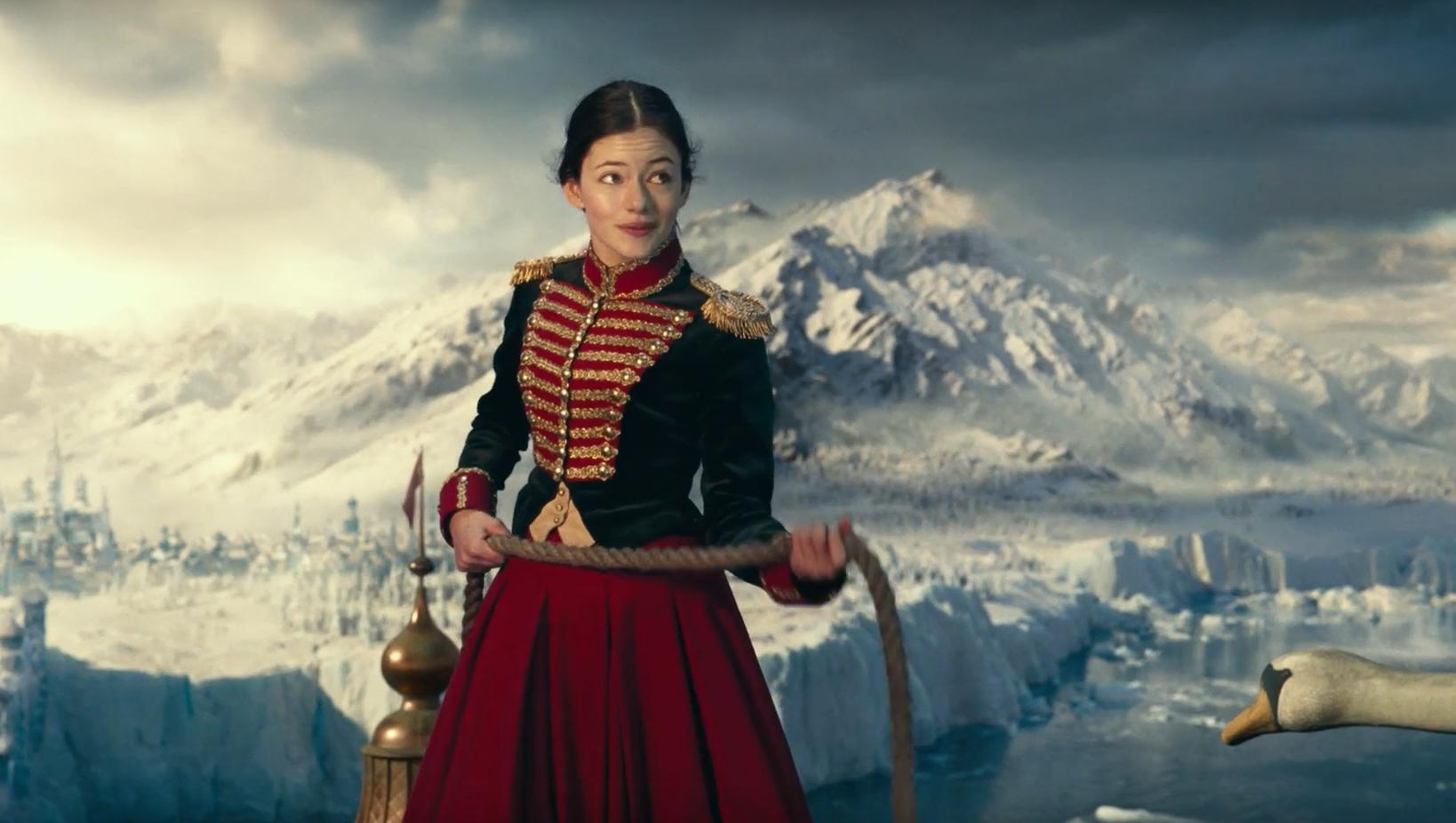 The biggest knock in a nutty bowl of many is that The Nutcracker and the Four Realms possesses an overly artificial look that feels less like watching a film and more like watching a making-of one. Perhaps that’s a little harsh, but what it essentially boils down to is that everything is stakeless and there’s nothing to latch onto. It’s close to impossible to truly buy into anything that requires some investment, and as a result, the core story of The Four Realms, combined with elements of The Chronicles of Narnia, Willy Wonka, and Harry Potter, is an elongated watch at an average 100-minute run time, telegraphing story twists and subject to humor that whiffs a lot. If there were one definitive positive, famed composer James Newton Howard brings the familiar sounds of the play to life and makes a score that could easily be used in any Christmas rotation.

You kind of feel for the cast here, especially Foy. The young actress who captivated so many hearts serving as the emotional tether of Interstellar when Joseph went up into space is forced to interact with so many things that aren’t there and awkwardly traverse a green screen backdrop. She has a sweet chemistry with Fowora-Knight that makes for a cute little PG-love story, though it isn’t enough to cover for an uninteresting plot. Nor is the presence of big/notable names in Mirren, Knightley (over the top doesn’t accurately describe her work in this one), Derbez, Grant, or Morgan Freeman as Drosselmeyer. Freeman, much the subject of controversy leading up to release for various reasons, sticks out like a sore thumb, and not in the way one would think. In a story that takes place in Great Britain, he doesn’t even make a halfhearted attempt at a British accent. Keep doing you, Freeman.

Another re-telling of The Grinch releases next week. Probably unnecessary, but that stands a better chance of christening the season of greetings than The Nutcracker and the Four Realms. As it stands, Tchaikovsky’s live ballet is still the best way to watch this well-worn tale.

6 thoughts on “The Nutcracker and the Four Realms”