Sadly, still missing this great theme song to kick things off. Sarah Quinn (Madison Iseman) and younger brother Sonny (Jeremy Ray Taylor) reside in the sleepy town of Wardenclyffe with their mother, Kathy (Wendi McLendon-Covey). For Sarah, she’s trying to smash through a writer’s block and finish a college essay that could put her in Columbia University, while Sonny is attempting to replicate a mini-replica of Nikola Tesla’s greatest invention with best friend, Sam (Caleel Harris) for a school project.

In between school work and pumpkin carving in preparation for Halloween, Sonny and Sam go exploring a deserted house for their side business that nets them “valuable” junk. What they end up finding is an old, unfinished manuscript by famed author R.L. Stine (Jack Black). Upon reading a few words, a ventriloquist dummy appears out of thin air. This dummy, soon to be known as Slappy, first seems to be a new protective friend, saving Sonny and Sam from the local bullies. That quickly turns once the dummy reveals he can talk, and more and more incidents arise. All Slappy wants is a family, but when the Quinns refuse, Slappy decides to make his own family, using the book to bring these monstrosities to life and endangering those lives in Wardenclyffe.

Yeah, the Goosebumps silver screen treatment took way too long to finally become a thing. Instead of finding a way to release in, say, 2004-2006 to capitalize and maximize on a pretty big and still sort of fresh IP at the time for a sizable millennial fan base, the 2015 release felt a little late. Still, it created warm nostalgia as well as a decent family flick. Despite taking the relatively same approach, Goosebumps 2: Haunted Halloween is devoid on the nostalgia and simply is a tepid family movie.

If the plot of the Goosebumps sequel sounds like déjà vu, that’s because it is. The Evil Dead setup aside, the same exact things happen and play out; Stine’s monster creations are unleashed, and to put them back on the page, a book has to be opened. Except for an obviously different cast and a few more baddies that longtime readers may or may not remember (I certainly didn’t), it’s kind of sad how similar this story is to its predecessor, especially when there’s no dearth of characters to use as focal points to mix and match something mildly different. 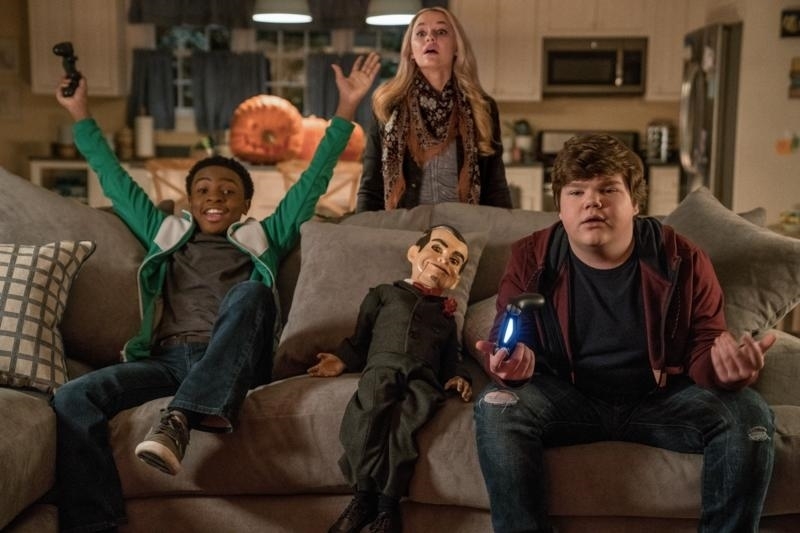 Probably the biggest knock against Goosebumps 2: Haunted Halloween is how low-quality it looks. For an ABC Family, straight-to-DVD, or old Disney Channel original, this wouldn’t mean much. For a full-priced film, it does. This one costs roughly $23 million less to make and it shows. Director Ari Sandel (The DUFF) seems to be caught in no man’s land as it pertains to making a feature; Haunted Halloween would probably look better as an animated film, as the CGI integration into the real world is scary bad.

Goosebumps 2 isn’t all bad. The scares are harmless and effective for the target crowd, in stark comparison to a like-minded and recent film in The House With a Clock in Its Walls, which is capable of giving the little ones nightmares. Taylor, Iseman, and Harris create an affable chemistry. Veteran comic performers in Ken Jeong and McLendon-Covey deliver some earnest laughs. And yet, there’s something big missing. Say what you will about Black, but he always brings an immense, kid-like zeal to every role and by proxy every movie he’s in. As he’s relegated to a status that amounts to something lesser than a side character, the sequel is missing a huge spark.

A light and tepid family movie will likely be enough for families who need a non-frightening, PG-crated horror to take the young’ns to in the month of October. For the vast majority of everyone else, there’s a noticeable energy that the brilliant Tesla couldn’t generate.