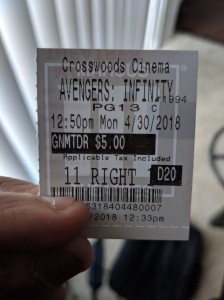 The road to infinity is paved with good intentions. This day would finally come. What is this day, exactly? The day in which the almighty titan Thanos (Josh Brolin) actively seeks out the missing stones to outfit his Infinity Gauntlet. Thanos’ goal? To restore balance in an overpopulated world. A noble goal, minus the whole part of killing a half of its inhabitants in pursuit of it.

Is there anyone powerful enough to protect the world from impending doom? Individually, no, but collectively, there’s a shot, albeit minuscule. The Avengers are fractured following the events of Civil War, but with the Mad Titan hell-bent on his goal, this is no time for ideologies to be the reason for this split. From Wakanda to the vast reaches of space and everywhere in between, our mightiest superheroes will have to assemble to save us.

Marvel’s Avengers: Infinity War is every bit the event one could hope for. It’s big, bloated, beefy, and any other pertinent, similar adjectives that start with the letter B. Stop if you’ve heard this before, but it’s the product of ten years of Marvel Cinematic Universe building to this precise moment. With something this sizable, it would be crazy to assume that it would go off without a hitch. But, the efficiency and effectiveness that Infinity War operates at is truly worth nothing. Honestly, if there’s any movie that earned the right to be this massive, it’s this one.

Not counting the informal Avengers movie that was Civil War, Infinity War is the first time since Age of Ultron our heroes have assembled en masse. That movie suffered for a multitude of reasons, but one main one being that it didn’t come off as an event, especially when Civil War was announced months prior to release. As one can surmise, that isn’t the case with this latest installment in the MCU. While a level of skepticism arises as bold decisions are made in the film’s final moments, the fact is the Russo Brothers have given people something to discuss and debate until May 2019.

For the first time in ten years, a Marvel production carries some tension and unpredictability throughout its runtime, beginning with a spectacular opening and culminating with an impactful ending. The directing duo know how to stage impressive action sequences (this time on a vastly bigger scale compared to anything previously in their filmography), but to overlook the smaller ones and how they’re composed would be criminal to do so, as there are many medium-wide shots that do so much more emotionally than standard close ups. This technical brilliance and overall uncertainty helps to power Infinity War even through the occasional sloggy moments, as does a rich score credited to Alan Silvestri.

But really, Infinity War banks on the fact that the viewer has likely spent 10 years in some shape or fashion not just watching, but legitimately appreciating many—if not all—of these heroes and their idiosyncrasies. Make no mistake, at times Infinity War is a disparate mashup that doesn’t flow effortlessly, particularly in the first half (I’ve already forgotten some of the endless names of places the teams traverse, and the weapon forged story thread is a little dull), yet the sheer amount of fun, epicness, and hilarity of seeing these characters interact is something that won’t be forgotten anytime soon. Like a Libra, balance is the name of the game and the Russo Brothers along with lead writers Christopher Markus and Stephen McFeely generally do a good job of it, rarely undercutting the somber aspects with humor and vice versa.

In name, this is an Avengers movie. In reality, this unequivocally belongs to Mr. Thanos. On one hand, it sort of marginalizes our heroes. On the other hand, we’re in the know with their stories so it’s not as important. Thanos very much has a story and an extremely misguided, though lightly-admirable, reason for doing what he does, feeling less of an emotionless, chaotic evil killing machine and more of an introspective, lawful evil tyrant who strongly believes in his mission. Thanos feels like a real person—in as much as a hulking purple titan can be. Part of this is the impeccable detail Brolin brings to the role; his facade, gruff voice, and comfort in dispensing justice to unlimited ends on the silver screen all make him perfect for this one. And perhaps a good part of that feeling can be attributed to the spectacular motion capture work; The Mad Titan is only behind the ape Caesar as fully realized CGI entities bought as human beings.

“Fun isn’t something one considers when balancing the universe but this…does put a smile on my face.” That phrase was uttered by Thanos in the trailer, one of a few instances in which what is seen in the buildup never actually appears in the movie. Still, the back half of that Thanos quote is accurate. There’s a perpetual grin that I personally had on my face, and judging on the opening box office and response, I’d assume the same for most.