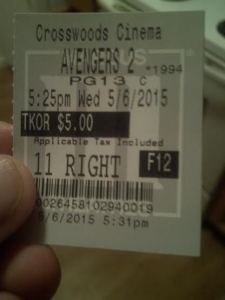 “How is humanity saved if it isn’t allowed to evolve?”

How is it that striving for peace almost always seems to make things worse than they are? There is no assembling The Avengers this time around, the group is already comprised. In Age of Ultron, the good guys are back and a cohesive super unit. Captain America, Iron Man, Thor, Hulk, Black Widow, and Hawkeye are doing their best to keep the world and humanity running smoothly. They are doing a great job, but as Tony Stark (Robert Downey, Jr.) states, they should be fighting in the hope that one day, they will no longer have to.

Enter the Ultron program, which Tony Stark is not able to build in a cave…with a box of scraps. Designed to be a global artificial intelligence defense that keeps unwanted intruders from entering Earth, Stark and Bruce Banner (Mark Ruffalo), decide to give another go. Unfortunately, the Ultron AI goes haywire, and “peace” in its mind involves the eradication of The Avengers and humanity.

At this point, Marvel cannot lose, from a revenue sense at least. Maybe one day a huge loss will come that ends up changing the terrain of comic book feature presentations, but not yet. From a quality sense, Avengers: Age of Ultron is still a winner, but not to the extent that the The Avengers was. Don’t take that as AoU being a failure, take it as AoU being a functional blockbuster.

Director Joss Whedon has the job of once again bringing these popular comic book characters together, and he possesses a real talent in doing so. He wastes no time in reintroducing the audience to the gang in a frenetic, fun, and maybe too comic-book-ish (it probably is stupid to complain about this given the origins, but whatever) opening sequence. Whereas maybe one or two characters from the first movie had less total impact and screentime, this go around, everyone’s contributions do feel as equal as could possibly be.

There’s even some notable depth given to a few of them that is totally unforeseen. Hawkeye (Jeremy Renner) is more than the human archer, and yet he isn’t at the same time. Sounds confusing, but it makes sense when seen. But the real development occurs with the arrogant Tony Stark. Downey, in yours truly’s opinion, hasn’t been this good since the first Iron Man. What is being done with his character is a nice, long, slow burn heel turn, reminiscent of a wrestler who shows bad guy tendencies for months but never officially turns until way down the line. It should be great to see it culminate in next year’s Civil War.

Not everything is handled expertly, however. It could just be a personal preference, but I’d prefer my Avengers films to be love-free. Not to spoil anything, but anytime two specific characters get doe-eyed and spout double entendres around each other, it is hard to stomach and the movie truly bogs down in pace. This is one of a few moments/side plots that are odd in their presence, adding to a story that at its base is somewhat coherent yet fragmented; not as complete as the predecessor. For what has come out with Whedon and the creative differences pertaining to AoU in various scenes, it will be interesting to see how things appear in the rumored extended cut once a home media release rolls out.

With a group this large and egos this sizable, you have got to have a villain to be formidable. Ultron (James Spader) is…just good. Visually, he looks menacing, and Spader gives a distinct voice to the character, but a belief exists that he could be so much more. His inclusion comes off as a tad rushed, as in it doesn’t even take a minute for the program to become corrupt. And, he falls short of being the badass he could be. The trailers painted him as a ruthless, sentient being, and he gets to about 75-80% of that. The other 20-25% is filled with hit or miss one-liners, which can be said for most of the film, and underdeveloped motivations.

Avengers: Age of Ultron is still the definitive christening of the summer blockbuster season, and it is hard to be completely dissatisfied with what is present here. If a hunger for comic book heroes and villains exists, one will get their fill with this one. But instead of feeling like a unique event all in of itself like the original did, AoU ends up feeling like another cog in the Marvel machine.

12 thoughts on “Avengers: Age of Ultron”