Say it loud, say it proud. Mary (Taraji P. Henson) is a hitwoman in Boston, carrying out the death deeds when the family ran by Benny (Danny Glover) needs people to be dealt with. On one routine hit, Mary executes her target professionally as always, but is taken aback when her mark is discovered to have a young boy.

This shakes Mary who isn’t quite the same after this day, and as such, has been looking over the boy from afar, who has run into some tough times. Feeling responsible, the hitwoman takes “Danny” (Jahi Di’Allo Winston) in privately, gives him some TLC, and finds the people responsible for Danny’s situation. But, the youngster is tied to some deep criminal roots, roots that have the potential to start a war between Mary’s criminal family and another, putting everyone and their lives at risk.

Proud Mary. Look at the poster, the name of the movie taken after the famous Ike and Tina track, the tagline (“Killing for the man every night and day”), and the general plot summary. Sounds a lot like a 70’s Blaxploitation flick, right? Wrong. Now, to expect something on the tone of, say Black Dynamite would be asking for too much, but, the recipe is here for 50% of that along with some solid, John Wick/Atomic Blonde-esque action. Unfortunately, what is present is an average-to-poorly made crime drama befitting of its release date.

Proud Mary starts off well enough. The title credits look like they came out of the 70’s, accompanied by The Temptations classic of “Papa Was a Rolling Stone.” Fun stuff, and Henson’s hitwoman wastes no time getting down to business with executing a lethal hit. But, that nice opening is the exception, not the rule, to Proud Mary. Once this movie jumps to one year after the incident, any hopes of the movie being a crowd-pleasing, gleefully violent ride down memory lane are lost. 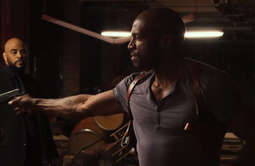 Really, Proud Mary is a “family” drama and not a compelling one. The story itself is essentially a basic “time for me to get out” one, so it comes down to the relationship/chemistry between Henson and Winston’s characters in getting the audience to care about their plights. At best, the chemistry between the two is mediocre and nonexistent at worst, hampered by a rushed union and saddled by sometimes clunky dialogue.

This is a problem that not only these two share, but others in the movie, in which characters have a weird habit of talking over others for no real reason. Other bonds and revelations come to the forefront in attempts to add stakes, but midway through, one may find it hard to care about either of the lead characters and whether they make it to see tomorrow. And this is terrible, because Taraji P. Henson is not only likable, but quite talented. But, Proud Mary never gives her much of an opportunity to be or sound cool, or look like a badass. Or, maybe she never gives herself the opportunity, being executive producer and all.

Director Babak Najafi’s last movie was London Has Fallen, not exactly a movie a director wants on their resume to show off their talent. Some of the jagged and rough editing issues found in that one pop up here as well, if not more so. A mid-movie raid shootout and one-against-all blitz play climax should feature ton of satisfying moments…if only they could be seen in clear. Hard to remember light being used so poorly in a feature after viewing this one. One scene in particular obscures 90 percent of Glover’s face in a basic conversation, making someone wonder how this could just be left in the movie as is.

With a lighter tone and tighter editing, Proud Mary could have been a fun throwback action flick in what is typically a lean month for new releases. Instead, it’s dynamite. Not the good kind.