This is Grand Theft Auto V played out on the silver screen. Los Angeles is the home of many things, including (apparently) the most bank robberies. Heading a crew of career criminals and military men is Merriman (Pablo Schreiber), who’s got the right-hand man in Enson (Curtis “50 Cent” Jackson) and talented driver Donnie (O’Shea Jackson, Jr) among other squad mates. Their goal? To pull off the job of all jobs: Rob the LA branch of the Federal Reserve, which houses untraceable money if taken at the right time.

In their way is Sheriff Nick O’Brien (Gerard Butler), a brash, take-no-prisoners officer lawman who may be just as bad as those who his crew is trying to stop. This can only end one way. The heat is on.

Quick, what do Proud Mary and Den of Thieves, two movies released in back-to-back weeks, have in common? Both employ people behind the camera who had major responsibilities in 2016’s London Has Fallen, the movie that keeps on coming back! Instead of Babak Najafi, Den of Thieves is put together by Christian Gudegast, the writer of that Mike Banning sequel who carries directing duties in addition to screenplay responsibilities this time around. While this is far from the best of the best in the cops versus robbers genre, it is surprisingly competent and even a little entertaining.

Hard not to compare every recent cops and robbers movie against Michael Mann’s legendary Heat, and Gudegast certainly doesn’t seem to shy away from the similes. Our good guys (read: bad guys) and bad-der guys intersect quite early and often, somewhat laughably with the frequency this occurs. Anyone who has seen this movie before knows what the climax will consist of. There’s some superfluous additions and scenes to the overall story; 140 minutes could probably be cut down to 120, max. However, a level of unpredictability does keep things engaging, and while somewhat implausible, there is a massive twist that doesn’t completely collapse when thought about.

Den of Thieves isn’t the all-out, fully-automatic heist-action the trailers set it up to be. This mad city (get it?), while not exactly slow paced, is slightly more methodical than anticipated. Think of it like GTA V, in that there are many set-up missions to get to the massive heist. Honestly, the film could use one more set piece—preferably in the middle—but at least Gudegast does bookend with a tense beginning and end action sequence that are shot and captured much, much better than anything in London Has Fallen or Proud Mary, aided by a steady score by composer Cliff Martinez. Good stuff for a directorial debut.

Despite Gudegast’s efforts to flesh out his main characters, they are of the one and slightly two-dimensional than three-dimensional ones. Machismo is the name of game in Den of Thieves; sadly, there’s not a prominent female to be found. 50 Cent is a name who’s not required to do much except look tough and be convincing with a rifle. That he can do. Easily, this is certainly Gerard Butler’s best role in years. Looking at his filmography, that’s not saying much, but there is a gruffness, gung-ho, and even intentionally comedic aspect he finds, playing off the stereotypical asshole officer in charge without being corny or groan-inducing.

But, the standouts are the underrated Pablo Schreiber, physically convincing and cerebral as the gangleader, and O’Shea Jackson, Jr, once again showing star power and thespian versatility in spades as the link that tethers the opposing forces. Even when the movie is too methodical in its pacing without adding a ton in the substance department, there’s enough collective charisma to keep from checking out. 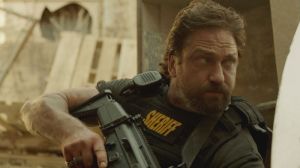 Any movie that’s designated for January release that actually isn’t a dumpster fire feels like a minor win. Den of Thieves does not operate at a high level, but a level slightly higher than mediocre.

5 thoughts on “Den of Thieves”