Art imitates life. TV writer and producer Glen Topher (Louis C.K.) has amassed much fame and fortune during his career. This success has come with a cost to his personal life, losing relationships with his ex-wife, Aura (Helen Hunt), and his girlfriend, Maggie (Pamela Adlon). He shares an enabling relationship with his seventeen-year-old daughter, China (Chloë Grace Moretz), seemingly always getting what she wants by asking her daddy and following it up with “I love you, Daddy.”

Their relationship becomes turbulent with the arrival of legendary filmmaker Leslie Goodwin (John Malkovich) onto the scene, who just so happens to be Glen’s idol. The pushing-70 Leslie immediately takes a liking to Glen’s daughter, naturally creeping out the father. Glen struggles with how to approach this, in addition to trying to overcome writer’s block for a new television show and navigating a partnership with the starlet Grace Cullen (Rose Byrne).

Nothing ever completely exists in a vacuum, be it art, food, technology, humans—or in this case—-thoughts on a film. I Love You, Daddy doesn’t so much arrive on the scene as it does get shooed to the back like a kid working backstage on a school play who accidentally is made visible. The accidentally visible, in this case, being screeners sent ahead of the storm. It is impossible to view this Louis CK-helmed flick without thinking about the sexual misconduct news and admission that involves CK (as well as a bevvy of other known figures). It leaves his film as a weirdly fascinating yet mostly disturbing viewing for mostly the wrong reasons.

Let’s get this out of the way, however. I Love You, Daddy features a guy who’s done horrific things, but it is still far from a horrific movie. There is some good here, beginning with the black-and-white styled employed by C.K., paying homage to works done by Woody Allen (Manhattan, particularly) and Stanley Kubrick’s Lolita. While Louis’ editing as it pertains to telling a coherent story can be problematic at times, within scenes, his camera work can be quite good and steady accompanied by a old-school orchestral score. The cast featuring names like Byrne, Adlon, Moretz, Charlie Day, and Malkovich make for a solidly acted production with the writing for their characters that is given, with Byrne and Moretz turning in the best work and managing to hold interest. 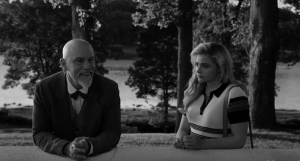 Louis C.K. shot this film in secret, and after watching, easy to see why. “Art imitates life” has never felt as fitting as it does in I Love You, Daddy. This is not an exercise in subtly. In roughly 25 minutes of screentime, the viewer is subjected to 45 seconds of simulated masturbation, a “casting couch” scene that covers all the bases of power abuse from both sexes, and an open admission by a character calling another a pedophile. Finally, there’s the dialogue, which feels way too spot-on to be clever. Lines such as “He’s kind of gross, you know? But he’s hilarious,” and “I’m sorry to all women. I want all women to know I apologize for being me!” are akin to reading OJ Simpson’s If I Did It.

Which raises the ultimate question: Why was this film made? As a comedy, little is funny. As a drama, little is dramatic. Did we really need a movie representation of what 2017 is going to be known for? Thematically, there appears to be a desire on Louis C.K.’s part to make some pseudo-intellectual message about everyone being perverts in the world in one way or another. But, this holds no water, especially after the weak, tie-a-bow-on-it nice ending that leaves little resolved.

One can only surmise that Louis C.K. made I Love You, Daddy to serve as some sort of release therapy to himself that would be played across a national viewing audience that could potentially “understand” it. Some things aren’t meant to be understood, but taken at face value. I Love You, Daddy is one of those things.

Photo credits go to vulture.com, rollingstone.com, en.wikipedia.org, and the malaymailonline.com.