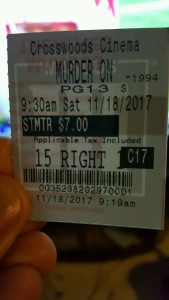 Everyone is a suspect…and connected by six degrees of separation. After a demanding case solved in Jerusalem, Hercule Poirot (Kenneth Branagh)—the world’s greatest detective—is allowing himself some R&R in Istanbul. The best laid plans never go according to plan, as durign his time away from work, Poirot is called to London to investigate a case.

With no travel plans readily available, Hercule turns to his friend Mr. Bouc (Tom Bateman), who helps run the Orient Express, a train on the path to London. While vacation is cut short, at least the detective can relax by reading some Dickens for a few days.

Again, the best laid plans never go according to plan, as the train is derailed from its course, and during this derail, someone on the train has killed a passenger. There’s a Murder on the Orient Express and said murderer is still on the train. Only one man can solve this.

Ahh, the whodunit mystery. It is a movie genre that can be pretty limiting when one thinks about it. Often, there isn’t a ton of depth under the initial mystery to make for anything unforgettable, whether the production is loosely defined as an “original” (à la Happy Death Day) or a remake adapted from an Agatha Christie novel, which Murder on the Orient Express happens to be. Summed up, this remake is probably unnecessary but is certainly impressive to look at, have a little fun with, and never think about again after an initial watch.

The first thing noticed about “MotOE” is the well-done cinematography, commitment to the respective time period via costumes/setting, lighting, and just the mostly strong direction from director Kenneth Branagh (Thor, Cinderella) shot on 65mm. Very easy to feel transported into 1934. Along with a fitting score by composer Patrick Doyle, it all adds to the old-school feeling. Stylistically, this is a classic movie made in 2017. In ways, the last-generation video game LA Noire comes to mind, from style to execution. While this Orient Express is far from original, there is a small feeling of freshness, because this type of production isn’t that common. As a basic whodunit, those who have never been exposed to prior iterations (like yours truly) may be surprised at how everything shakes down. While the actual culprit reveal isn’t something I’m completely pleased with, it did keep me guessing for the bulk of the runtime, doing the job on that front. 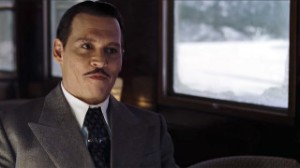 While Murder on the Orient Express’ highest plus is that of the technical work behind the screen, it isn’t without a little fault. The murder scene in particular which the movie is built around is rather rushed and isn’t really treated with the gravitas one would be led to believe. The medium shots from outside the train peering into the glass in voyeuristic manner is nice to look at, but probably a bit overused as well after so many times without amounting to much. As inane as this may sound, the white subtitles were a little easy to miss at times with some of them being shown against backgrounds (walls, dress shirts) that also happen to be white. Small, but some of this dialogue is critical and easy to miss.

What isn’t easy to miss is that mustache Kenneth Branagh sports as the famed detective. It stands out among everything, like his performance among the rest of the cast. Call Murder on the Orient Express ‘The Kenneth Branagh Show’ as director, lead actor, and producer. He is an interesting character with some internal depth and Branagh does a great job with an intro scene that makes Poirot easy to buy into as the self-proclaimed world’s greatest detective. Where Branagh (and screenplay writer Michael Green) struggles is with the repeated stabs at humor. A few are effective, most are not. Same can be said for the interrogation scenes. Half seize attention, but others can actually be dull.

A cast this beefy shouldn’t be predominantly forgettable though. Yet, that’s accurate for this film. Willem Dafoe, Judi Dench, Penélope Cruz, and Manuel Garcia-Rulfo all blend into each other. Honestly, I can’t remember who was the countess and who was the cook! Others like Daisy Ridley, Leslie Odom Jr, Johnny Depp, and Michelle Pfeiffer do make a little more of a lasting impression, but to call them fairly detailed would be a tad too generous. This is Branagh’s baby and his alone. 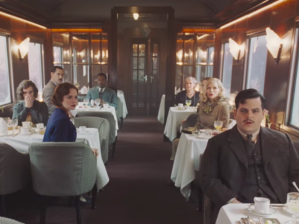 It is Branagh as the conductor, engineer, and bellhop who leads Murder on the Orient Express to a destination of Finesville. Choo-choo.

5 thoughts on “Murder on the Orient Express”