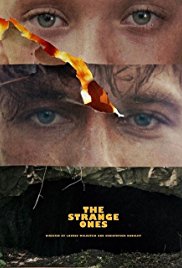 Not only is the Universe stranger than we think, it is stranger than we can think. Two young travelers in Nick (Alex Pettyfer) and Jeremiah (James Freedson-Jackson) are making their way across what looks to be the American heartland. It’s a vacation of sorts…or so it is to be believed.

No one knows exactly why the two are being nomads. Even Jeremiah doesn’t really know what the deal is. Regardless, there are hidden depths and secrets that may prove to be the key as to who these young men are, and what their aim is.

Along with it being an independent film, hearing a movie titled The Strange Ones perked the intrigue level for yours truly. Carrying the genre descriptors of drama and thriller only seemed to hint at the possibilities of something truly unique. Alas, The Strange Ones is part mesmerizing and part mundane, making for a product that exists in a gray area of meh.

There are two halves to The Strange Ones, co-directed by Christopher Radcliff and Lauren Wolkstein. The first half relies on the mysterious relationship coupled with the open-world, frontier-like setting. Little hints in pieces of dialogue serve to build expectations for a worthy story reveal. It can be frustratingly slow and tough to latch onto any one individual, but, Radcliff and Wolkstein do a strong job of keeping interest levels high via confident technical direction and a dingy (in a positive way) cinematography that amps up the mystery along with another ambient score by Brian McOmber (It Comes At Night).

The first half is undoubtedly stronger than the second half. As the reveals and the reasons for the brothers being on the run and the nature of their relationship are brought to light, the film loses its vice grip on the audience. To hopefully spoil nothing, there seems to be a lot wanting to be said about trauma/coping, perception, and growing up, however, the execution is lacking and left a little too vague. Perhaps it is here where the troubles of adapting what was originally a 2011 short movie into a full-length feature are evident. From a thrilling aspect, The Strange Ones disappoints as well, serving much more as a drama and mystery than anything truly white-knuckled or unnerving.

There’s a chance that more clarity could be gained from an additional re-watch. However, the detached story begets detached characters that ultimately makes for an empty experience. There are a few atrocities and disturbing moments that are striking, but it is hard to say they garner any emotion. Unfortunate, too, because the two lead performances are quite sound in Alex Pettyfer and James Freedson-Jackson. Pettyfer—probably known more for his physique and difficulties with Channing Tatum than his acting chops—blends easily into a role that should launch him into other meatier roles. But the standout is the young Freedson-Jackson (Cop Car). The way he delivers specific dialogue and holds his gaze when recollecting things is spectacular. One scene early on in particular is haunting. With stronger scripts, the youngster should have ample future opportunities to become a rising star.

And maybe that’s the best way to look at The Strange Ones, a production featuring actors and directors who show obvious talents that have yet to be fully realized. It’s a half-empty one and a half-full one.