How…does it..feel? Cold. As in the Cold War, the year being 1989. In Berlin, the war is winding down, but political unrest is winding up. After a high-ranking secret agent is killed in the streets, the MI6 sends in their best, agent Lorraine Broughton (Charlize Theron). Her mission is to track down Bakhtin (Jóhannes Jóhannesson), who not only killed agent Gasciogne (Sam Hargrave), but is in possession of a list that is trouble for everyone who doesn’t have it.

To retrieve it, she’s paired with station agent chief David Percival (James McAvoy). The two must traverse the shady, seedy city of Berlin to prevent major worldly damage from occurring. But in the world of espionage, no one can ever truly be trusted, and everyone knows more than they’re letting on.

There are some movies that earn their keep almost entirely on one scene. In Atomic Blonde, that one scene is an amazing stairwell fight scene that rivals some of the best American action movie scenes in recent memory, namely, John Wick’s red circle club shootout, that movie being co-directed by David Leitch. He’s on his own here, and in this one scene, it’s tightly constructed, highly unpredictable, and impeccably choreographed. Honestly, it along with the production is probably worth the price of admission alone. That doesn’t absolve the rest of the movie from its mild-at-best storytelling and script. But Atomic Blonde brings enough hot aspects to offset them ever so slightly.

Atomic Blonde is bathed in style from the get-go, employing a cool and neon-hued color palette that makes the locale of Berlin and that of its many hotspots pop off the screen. Based on a graphic novel known as The Coldest City, Leitch seems to draw inspiration from that medium in the way some scenes are shot and presented. In addition to the technical achievements, this film features a moody, industrial score by composer Tyler Bates (yet again, another John Wick connection) and an easy-listening, new-wave/synth pop soundtrack. He even manages to craft a central theme that will surely be used in any subsequent sequels.

And yet, Atomic Blonde’s probably closer to being a bad movie than a great one. At least script-wise. The espionage plot can more or less be summarized by “everyone twists everyone.” Even the characters who are rarely seen, if at all, are twisting everything. Leitch uses an interrogation by an unreliable narrator that frames the events of the story. At times this method works, but other times, little is added, or rather, the natural flow of the story is broken. A conventional telling would likely make things more comprehensible.

With multiple watches, it is a possibility that the numerous pieces, curveballs, and turns fit better and make some sense. Problem is with Atomic Blonde, it’s hard to actually want to go back and immerse into this world any deeper than surface-level. Watching an espionage movie already conditions the viewer (or at least, yours truly) to distance themselves from the characters who make up it. If everything is going to be flipped on its head, what’s the point of getting invested into anything or anyone?

Still, there’s a ton of talent on hand in the film that keeps it afloat. Charlize Theron, of course, can do it all. A dangerous and debonair dame, she’s perfectly cast in the role of Lorraine. An ass-kicker, but takes her share of getting her ass kicked, strong, yet vulnerable. Her dynamic with James McAvoy, having mass amounts of fun being a complete wild card, is compelling. Due to the twisty nature of the genre, however, no characters are given much weight; everyone is disposable to some degree. John Goodman and Toby Jones, while nice to see on screen, play roles anyone could play as nothing is asked of them. Outside of Lorraine and Percival and maybe Delphine (Sofia Boutella), all other characters might as well be a jumbled mass of indiscernible people who sound the same with similar-sounding names. 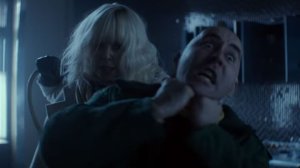 Looking for a brunette or redhead? Go elsewhere. Atomic Blonde is light and ditzy on characterization and solid storytelling, but high on direction and sensory fun. Blondes do have more fun.