Mad Max: Fury Road with a SUV and without the fury. Waitress and divorcee Karla Dyson (Halle Berry) gets some much-needed time to spend with her six-year old son, Frankie (Sage Correa) at the county fair. It’s time away from the mundane job she works, and it allows her to take her mind away from the impending custody battle with her ex-husband.

While taking a call concerning the custody, Frankie vanishes. Panicking, Karla manages to spot her youngster being forcibly kidnapped and placed into a car. What follows is a long, long pursuit across the freeway, countryside, and everywhere in between. Karla does not know why Frankie was targeted, but one thing is certain: She’s not stopping until she gets her son back.

A title can say it all. In the vein of similarly basic-named movies like Taken, Hot Tub Time Machine, and Snakes on a Plane is Kidnap. There’s something a little cool about hearing a movie’s title and knowing exactly what it will consist of. There’s also a level-set aspect after hearing such obvious, generic titles. As a result, it’s hard to be truly disappointed with the final quality of said movie. Kidnap is said movie—nothing exceptional, kind of awkward—but watchable.

A person can go into Kidnap blind (as I did, never viewing the trailer) and know rather quickly how the events will play out. It plays like a poorer man’s version of Breakdown, released roughly 20 years earlier. However, writer Knate Lee and director Luis Prieto do buck convention, just a little. Instead of a “whodunit,” that aspect is immediately removed about 10-15 minutes in. What we’re treated to is a prolonged car chase that manages to grab attention, despite having some choppy, fragmented cinematography, as well as an odd fixation on how fast Berry’s traveling on the speedometer. The climax, as common as it is, carries a moderate level of tension. Overall, Prieto’s direction is perfectly competent with flashes of impressiveness, and some over-direction.

Around 87 minutes, Kidnap is too short to ponder its existence. But that doesn’t mean that those minutes are expertly paced. For a movie this short, quite a few shots and moments feel needlessly put in or drawn out. Take for example, the aforementioned early call that Karla takes concerning the custody of her child. Being introduced when it is, this would surely play into the plot at some point, right? No, this proverbial Checkhov Gun detail never goes off and is completely inconsequential to the story, as it could be told without knowing Karla is a divorcee in a custody battle. While it isn’t a bad thing, the plot never evolves from bad guys doing a bad act because they’re bad. The common clichés found in an average thriller/horror (dead phone, car breaks down, incompetent police, etc.) are present here.

Being the only star of the movie, all the responsibility unsurprisingly falls onto Halle to do her best to elevate it. She’s not given the best stuff to play with; there are some brutally bad monologues during the car chase that are a pain to watch and hear her say. Her distressed faces can border on being over-the-top. Still, Berry’s a professional, and more than not she plays her part well in being a scared yet resilient parent during chaos. No one else really makes an impression, as they all just fall into forgettable roles. 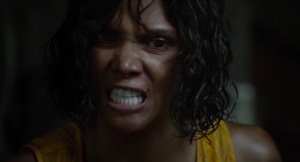 There’s worse out there than Kidnap, certainly. However, likely to vanish from sight, mind, and theaters quickly, an eye won’t be batted and nothing of value will be lost.