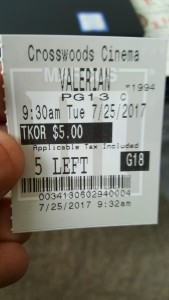 Because the galaxy couldn’t hold 1,001 planets. The 28th century spawns Alpha, an intergalactic space station home to tons of creatures living peacefully together. Maintaining order throughout the galaxy are special operatives Valerian (Dane DeHann) and Laureline (Cara Delevingne). They are a duo who could be more; Valerian is finally ready to put away his player ways and wishes to marry Laureline.

Before their future can be properly assessed, the two get assigned to solve a mystery happening in the heart of Alpha. It’s a mystery that if unsolved, is certain to end all life not only on Alpha, but in the whole entire galaxy.

In some corners, Valerian and the City of a Thousand Planets is jokingly being referred to as “the most expensive independent movie made,” pulling in less than 20 million opening weekend on a production budget of at least 150 large. Honestly, it’s been destined to be dead on arrival in the United States since the first trailer,  and no amount of 10-minute showings before Spider-Man: Homecoming changed that. Being dead on arrival doesn’t mean that Valerian is bottom-barrel bad, but, in a way, one almost wishes it were. Just so there would be more to talk about.

What is there to talk about? The visuals. Director Luc Beeson (Lucy, The Fifth Element) crafts a movie that looks very unique even in a cinema landscape that has seen numerous space opera/otherworldly features of late like Star Wars, Star Trek, Guardians of the Galaxy, and Avatar. It takes a little while to get used to the amount of green screen, but the easiest way to describe what Beeson does here is thinking of Valerian like a moving painting. This mostly applies to early scenes in a desert setting that stand out vividly, and in later scenes Beeson comes up with a few sequences of action that are sharp and, most importantly, coherent.

Coherent isn’t a word that’s all that applicable to Valerian’s story, however. Also written by Beeson, his film starts out compelling enough and builds the mystery with enough intrigue…but it doesn’t last. Specifically, the side plots never really connect to the main story at hand, and it isn’t until well into the second half when Valerian begins to funnel its focus into the A plot. A plot, in essence, that involves some predictable shady dealings by a character in power seen many times over.

Concealed from much of the trailers, Valerian additionally moonlights—surprisingly heavily— as a love story between the characters played by DeHann and Delevingne. They are passable together, though the two lack truly great chemistry with one another, and anytime their romance is asked to carry large chunks of the runtime, Valerian suffers. Delevingne is solid; looking and acting the part as a believable, hold-her-own, rough-around-the-edges operative. It’s hard to unequivocally say the same about Dane DeHann’s work, unfortunately.

DeHann’s a capable and talented actor (in my opinion), but his best work seems to come in off-kilter and/or tweener/antagonist roles. As Valerian, he’s hard to take seriously as a hero and galaxy lady-killer, and rather unlikable for at least half of the movie. Even his voice sounds odd in the way a person tries to portray someone sounding cool. While playing more like cameos than notable characters, Rihanna, Ethan Hawke, and Herbie Hancock nonetheless add to the unique world that is Alpha.

A gorgeous looking universe without boundaries needs heroes without limits. It also needs a tighter story and a better lead performance. That about sums up this space jaunt that is Valerian and the City of a Thousand Planets.

7 thoughts on “Valerian and the City of a Thousand Planets”