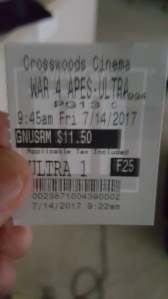 The night is darkest just after the dawn. Years after Koba’s betrayal, the ape leader Caesar (Andy Serkis) and his nation of apes remain taking residence in the woods. Trying to live peacefully away from conflict, conflict finds them by way of The Colonel (Woody Harrelson). His assault on the apes’ home leaves massive casualties.

Now out for revenge, Caesar, along with Maurice (Karin Konoval), Luca (Michael Adamthwaite), found hermit Bad Ape (Steve Zahn), and a young mute female straggler (Amiah Miller) embark on a journey to locate and eliminate The Colonel. The woods are no longer safe for apes, but a new location has been scouted and deemed livable. But, the war between apes and humans must reach a conclusion before the next chapter in ape evolution can begin.

Of course, it should go without saying at this point that the CGI, motion capture, rendering, and whatever else I’m probably forgetting on the technical side of this feature is absolutely impeccable. I’m saying it again because as spectacular Dawn was on that front, War takes it up multiple levels, proving that in three years technology evolves at an exponential rate. There are shots—extreme close up shots—of Caesar and his mains-in-command that are mind-blowing, and full of weight.

Fear and loss play a huge part in this movie; the consternation is seen on many of the lead characters’ faces. The character arc of Caesar goes very deep, and Serkis does it all as the ape leader. His delivery of dialogue, as well as sign language and facials, is moving. Not to be shortchanged either are newcomer Steve Zahn, Michael Adamthwaite, and Karen Konoval. Woody Harrelson stands as the best human character the reboot has seen, his style being perfect for the military leader. Some of the best moments are devoid of any dialogue or even subtitles. Reeves opts to tell some of War for Apes completely visually. The sounds of composer Michael Giacchino go a long way in making this endeavor a success.

In a cinema world in which seemingly every big studio is on the hunt for the next universe starter or continuation, War for the Planet of the Apes has no real aspirations to do so. One would be doing themselves a massive disservice by not watching the predecessors, but, it is cool that Reeves commences War with two-sentence recaps for newbies that summarizes everything newcomers need to know before seguieng into an impressive opening action sequence. War for Apes is a mostly cold and bleak affair, befitting of a predominately cool grey and blue color palette. That doesn’t make it any less of a technical masterpiece, though.

War for Apes, like Dawn before it, uses its primates to hold a mirror to our own society. However, where Dawn was subtler in its approach, War goes a little more overt and obvious, lessening the impact and the thought-provoking themes ever so slightly. The war aspect of the title is present, but the war itself seems to be more metaphorical than literal. Do not go in expecting a prolonged blitzkrieg; War for Apes is emotional-drama first, action-blockbuster second. 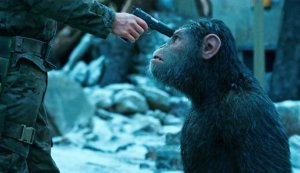 The last stand for Caesar and company caps off an amazing epic that will rank up there with the best trilogies in film history. This war closes the chapter between humans and apes, but won’t quickly be forgotten.

19 thoughts on “War for the Planet of the Apes”