Men, who needs them? Growing up on the world of Themyscira is young Diana, daughter of Queen Hippolyta (Connie Nielson). This world of Themyscira is inhabited by nothing but females. Females who are Amazon warriors and quite adept at defending their home turf. They’re in a relative time of peace, and as a result, the Queen doesn’t wish for her daughter to be trained as a warrior, but rather to enjoy her childhood despite the daughter ever so wanting to get her hands dirty. In secret, Diana trains with her aunt, General Antiope (Robin Wright) in preparation for the end of peace.

That time comes when World War II soldier Steve Trevor (Chris Pine) washes up on their home world telling stories of the horrors of the war he’s been fighting. Believing WWI to be the fault of God of War, Ares, mature Diana (Gal Gadot) sets out to extinguish him and bring eternal peace to the world, even it it means leaving Themyscira behind forever.

Electra and Catwoman. That’s it as far as super-heroines go as it pertains to getting their own features in the last 15 years. Yours truly doesn’t need to summarize the quality—or lack thereof—of those films. Wonder Woman arrives carrying the sizable burden of possibly ushering in more female protagonist superhero blockbusters depending on its quality. Even more of a burden than that is placed on Wonder Woman in the hopes that this is the film that course corrects the DC Extended Universe out of dark beginning waters. So, there’s only one question. Is it good? Absolutely.

Make no mistake, Wonder Woman is the basic superhero origin story. But, it’s the type of story needed when developing a massive, interconnected universe and getting audiences to care about its heroes who make it up. Its basic superhero story does play out a little more uniquely than most of its contemporaries. First, from a visual aspect, utilizing World War I and London and seeing a vibrant island world such as Themyscira in all of its gold hues and lushness simply makes for a more compelling watch, even before director Patty Jenkins (Monster) showcases the equally compelling action sequences.

Second, the fish-out-of-water approach works brilliantly, and more importantly, it allows Wonder Woman to distance itself from the “it’s so doom and gloom” complaints many rightfully had with most of the DCEU’s features up to this point. There’s legitimate comedy, and it comes off as organic, instead of feeling written in at the last moment. Aside from a noticeable period in the middle third, the movie rarely comes to a complete halt in its pace.

As a whole, Wonder Woman is endearing, partly because Prince isn’t written as a perfect, infallible character, but also, because Gal Gadot makes her so. Once again, her amazing work as the titular character is a reminder that the Internet more often than not needs to just let casting decisions play out before casting judgement on them. Gadot’s come a long way from Giselle in the Fast and Furious movies. She owns the screen, and is asked to convey a fair deal of emotion, all done in convincing fashion. Just as importantly, she looks the part.

The job she does here is that spectacular that it is a struggle to consider who else could play Diana Prince. After Gadot, Pine brings a lot; carrying the film’s message about humanity not being perfect, but very salvageable. The chemistry the two possess between each other, and among the bit characters played by Ewen Bremmer and Saïd Taghmaoui, is infections. As for the villain, akin to similar comic origin movies, the adversary—in this case, adversaries—leave a little to be desired. They’re adequate, but extremely basic stock cutouts that never feel like a true threat to our hero. 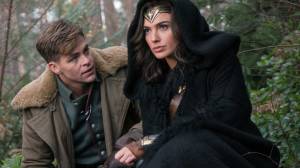 In Wonder Woman, DC finally manages to corral a fun and emotional origins story together. Maybe all it takes is a strong woman to make things better.