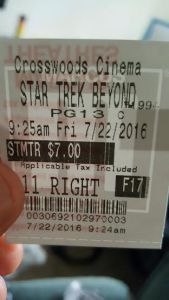 Everything becomes old at some point. Even space. It has been about three years into a five-year exploration trek for Captain James T. Kirk (Chris Pine) and his crew on the USS Enterprise. To be honest, Kirk doesn’t know if captaincy is right for him anymore, and he starts to think about what else may be out there beyond the vast reaches of space. Spock (Zachary Quinto) is in the same mindset as well, as his efforts may be needed back on his home world.

But in the present, their full attention is needed as the Enterprise is bombarded and ransacked by the villainous Krall (Idris Elba) and his “swarm,” looking for a piece of technology that is vital for his ultimate mission. The destruction caused by the swarm has left the crew stranded and separated from each other on an unknown planet, with no working communication. Escape from this planet appears impossible, but there’s always hope in the impossible. 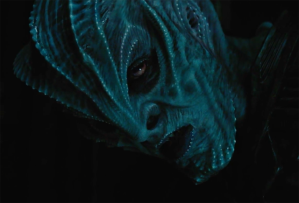 50 years is a long time for anything to be around and and active, be it a man, woman, automobile, whatever. In 2016, Star Trek Beyond arrives to punctuate the 50th anniversary of Gene Rodenberry’s original series. Kind of a big deal? Absolutely. Adding to the pressure is the simple fact that the blockbuster season of 2016 has been terribly lean on action thrills since Captain America: Civil War hit cinemas two and a half months ago, or technically, before summer truly began. May have come a little late, but Star Trek Beyond honors what came before it, while bringing the big budget summer fun.

With an obligation to direct another popular space opera franchise, J.J. Abrams couldn’t make the return to the captain’s seat (more of a co-pilot as a producer). This time, that honor falls to Justin Lin, Fast & Furious franchise savior. After seeing what he did with the latter half of the Fast franchise, there was never any doubt in my eyes as to whether his skills could translate to a different universe. Do scenes get a little cut-happy sometimes? Sure, but at least there’s not as much lens flare, right? His destruction scenes are every bit what Independence Day: Resurgence by all accounts should have been and then some, with awesome cinematography and the sounds of Michael Giacchino accompanying them. Rest assured, this isn’t Dom Torreto and Brian O’Conner in space; this is very much Star Trek. 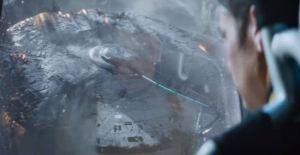 And not just Star Trek—revisiting cool but well-worn species, foes, and locales—but Star Trek—introducing new species, foes, and locales. Video gamers may notice some similarities to Mass Effect 2 in a few places (the bee swarm looks a lot like the Collectors), and the object in question that pushes the adequate plot is more or less an MacGuffin, but still, kudos goes to Lin and writers Simon Pegg and Doug Jung for including a few touching callbacks to the original series but also choosing to go forth into new terrain. Specifically, the two new characters are welcome additions.

Idris Elba is unrecognizable, but even under a bevvy of makeup and costume, he’s got presence. He carries a level of menace that hasn’t been seen in the new reboots by any previous baddies. While he isn’t as mysterious or developed as, say John Harrison, was, he does have a thread that gives him some depth in the final act. The real star of the feature, though, is undoubtedly Jaylah, played by Sofia Boutella. She’s unique visually and can hold her own with intellect or in battle. The thing is, there is much to be uncovered into her backstory. But this is a great introduction, and let’s hope that future installments continue with more Boutella in this role.

As for the returning cast, there’s not much more to be said for them except for that they are strong in their roles. Better yet, none look to be tired with what they are doing. Some, like Saldana’s Uhura and Cho’s Sulu are pushed to the backburner this time, but others like Pegg’s Scotty, Urban’s Bones, and the late Yelchin’s Chekov have many pivotal scenes and more importance to the plot than before. Pine and Quinto are still the stars, but Beyond truly feels like an ensemble effort this go-around, and that isn’t a bad thing. 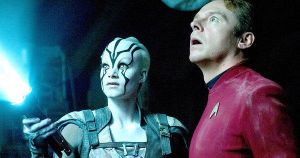 Star Trek Beyond was not sabotaged by its first trailer, or by its latest director. With three quality films into the reboot, yours truly is very excited and even eager to see where the next journey takes Captain Kirk and company.

10 thoughts on “Star Trek Beyond”