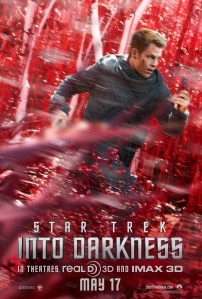 To get to the dawn of the day, one has to make it through the darkness of the night. On an exploratory mission to preserve new life undetected, Captain James T. Kirk (Chris Pine) of the U.S.S Enterprise violates the undetected part to save a friend. For his actions, he is stripped of the ship and his status as captain.

But, he’s brought back to power when a mysterious threat declares war on StarFleet by wiping out many of its senior officers in one fell swoop. It’s up to Kirk, Spock (Zachary Quinto), Uhura (Zoe Saldana), and the rest of the crew to find the threat, hiding in dangerous deep Klingon space, and eliminate it.

JJ Abrams returns to the directorial seat of the Enterprise to direct the adventure of Kirk, Spock, Bones, and crew again. He sure likes lens flares maybe a tad too much but this is Star Trek and one expects things to carry some light and look bright. Isn’t that big of an issue in the opinion of yours truly. Action-wise, there are a few really good scenes, more than the first film for sure, but aside from the climatic set piece which is awesome, the extra 35 million in budget doesn’t completely improve upon the action from the initial Star Trek reboot.

For diehard Trekkie fans, Into Darkness is probably looked at as Abrams and his team of writers in Roberto Orci, Alex Kurtzman, and Damon Lindelof peeing and desecrating on everything sacred that Star Trek possesses. Its story apparently takes some sizable inspiration from The Wrath of Khan and other old episodes/seasons, but adding little twists and additions. For casual fans such as myself whose first real exposure to Star Trek was 2009, I could never get all of the Easter eggs or changes, and as such, the story is simple yet satisfying, not disrespectful to what came before it. While it would have been interesting to see this movie explore some deeper themes like the old Star Treks were famous for doing, this 21st century reboot seems focused on being light, which is fine.

However, the 21st century reboot has been focused on character just as much, if not more than, action, and relies on the cast to deliver those character moments. Chris Pine and Zachary Quinto reprise there roles and further the challenging yet unbreakable bond that defines Captain Kirk and Spock. Honestly, the best moments of Into Darkness are between the two leads rationalizing what friendship means to each of them, and it sounds corny, but is executed wonderfully. A returning Zoe Saldana steps back into the Uhura role, with this time given more to work with. Karl Urban, John Cho, Anton Yelchin (R.I.P) do well in supporting roles adding humor at times, and Bruce Greenwood is a steady hand that adds emotion.

Newcomers to the cast include Alice Eve, Peter Weller, and Benedict Cumberbatch. Eve is the only person who feels out of place in the film, sort of bland in her performance and existing to only serve as eye candy in what is now the infamous lingerie scene that serves no purpose. Weller, while having a very minimal role in terms of screen time, is very pivotal, and there is something cool about seeing the Robocop star as a part of the cast in one of the biggest media franchises there is. Lastly, Cumberbatch’s character is a great mystery. He’s a presence, both emotionally, physically, and audibly.

Make it so. Star Trek Into Darkness makes the JJ Abrams directed reboots 2 for 2. Diehards will be be none too pleased, but everyone else? Resistance to enjoying STID is futile.

3 thoughts on “Star Trek Into Darkness”