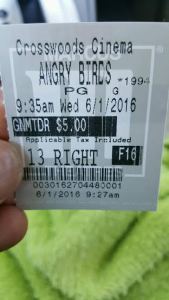 Fly like an eagle. No wings? Use a slingshot. On Bird Island, birds without the ability to fly reside. One of them, Red (Jason Sudeikis), perpetually lives in a mental state of irritability. He’s different from everyone else, as this is an island of perpetual happiness. Needless to say, he doesn’t fit in.

One particular outburst lands him in anger management with other Angry Birds Terence (Sean Penn), Chuck (Josh Gad), and Bomb (Danny McBride). As they attempt to manage their tempers, pigs from Piggy Island make themselves welcome as explorers, and most of the population is accepting. Except for Red, who believes the pigs aren’t as kosher as they appear to be. 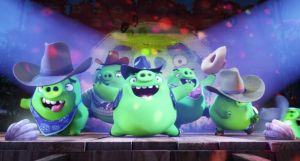 It’s not so much a shock that The Angry Birds Movie is an actual thing (even if it is based on an application), it’s a shock that it has arrived in 2016 instead of striking while the iron was hot, like, say, in 2012 or something. Despite it being as lean as one could imagine a story-less smartphone game app to, Angry Birds the Movie is passable, every enjoyable here and there.

First-time directors Clay Kaytis and Fergal Reilly provide the movie with a vibrant and colorful palette. Sounds trivial, but sometimes a small part of an animated movie’s appeal is simply how well it looks, and the work the duo has done previously in works like Frozen, Wreck-It-Ralph, and Cloudy with a Chance of Meatballs seems to aid them here. A highlight of their particular movie here is the climax, ripping right from the app, loaded with action and good fun. 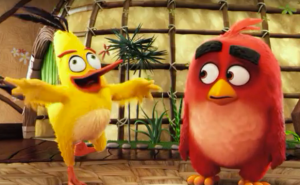 Angry Birds‘ script makes clear references to its original intellectual property, from small bits of dialogue to the beats of its plot. It works a little better than anticipated, and even has sort of a message about friendship. The truly cynical type may see this movie leaning one way or the other on the political spectrum, but I look at it more of the inoffensive variety .

But, the film is stretched pretty thin, evidenced by more than a few musical montages and some flashback gags that are not all needed. And, Angry Birds is kind of relentlessly loud. Only few moments of quiet exist; otherwise, the mode is GO! GO! GO! like the bird Chuck. There is some amusing humor to be found, most is slapstick in nature. The crudeness of a few jokes is a little off-putting for a family-targeted flick, however.

The Angry Birds Movie does employ some sound voice work, some being better in an animated movie than others. Jason Sudeikis is reminiscent of his character in Horrible Bosses on a PG-level, with a good amount of quick wit, with the only real complaint being that he doesn’t come off as angry but rather detached and aloof. Gad, Keegan-Michael Key, Bill Hader, and Peter Dinklage are here and noticeable in that way that adds to a character but not to the point where their vocals stand out in a weird incongruence to their characters. On the other end, one could go throughout the entire film without knowing that Danny McBride, Jillian Hall, or Maya Rudolph contributed to the movie. “Easy-money-of the-year while-being-top-billed award” goes to Sean Penn, who grumbles for 98% of his screentime. Must already be working on his post-El Chapo career, not wanting to be seen or definitively identified via voice.

Not completely flightless, The Angry Birds Movie isn’t exactly flying high in the sky either. But technically as a video game movie, the quality isn’t bad. The real question is what is coming next. Sugar Smash, maybe?

7 thoughts on “The Angry Birds Movie”