My Tweets
Posted on December 15, 2015 by MovieManJackson

So this is where The Fast and the Furious comes from, eh? Former Ohio State Buckeyes quarterback Johnny Utah (Keanu Reeves) is now a rookie FBI agent in Los Angeles assigned to the bank robberies division. His partner, veteran Angelo Pappas (Gary Busey) has been trying to take down the “Ex-Presidents,” a group of bank-robbers who get in and get out with money in less than 90 seconds.

Pappas has a theory that the Ex-Presidents are surfers, and with Utah being the ex-jock, he is tagged to infiltrate the group, which first means learning how to surf from the local hottie Tyler (Lori Petty). Soon, he gets introduced to other surfers as well as Bodhi (Patrick Swayze), a man with an unique worldview that Johnny is drawn to. Their bond grows, which could be a problem if Utah’s gut is right about Bodie and his crew. 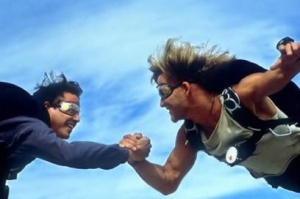 The opening credits scene kind of sums up what Point Break is going to be. What is that, you ask? Some pretty-looking shots directed by Kathryn Bigelow (The Hurt Locker, Zero Dark Thirty, and some corny lines of dialogue (100% Utah!—and a thumbs up from Keanu!). It sets the stage for the rest of Point Break, a two-hour plus extreme ride designed to thrill and entertain, intentionally, and unintentionally.

There are few, if any, surprises with the way this film’s plot plays out. It is not a terrible one, just one of many “guy gets in too deep” type of deals with a bit more cheese laid on for good measure. Credit is given to Bigelow and her writers for attempting to bring a little bit of depth to the script and its villain in its theme of establishment vs. anti-establishment. Maybe I’m looking too hard at this, but I do get the feeling that Bigelow wanted this to be more profound and have the viewer question things, and though that doesn’t entirely work, it does manage to flesh out a character or two. 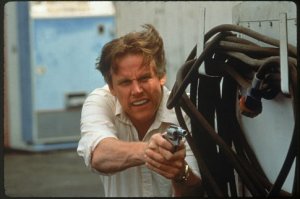 But at the end of the day, the plot is a vehicle for Bigelow to showcase her expertise in all that is extreme. Point Break, even in its now decidedly 90’s aesthetic, looks pretty badass. The title is a surfing term, and of course, surfing is here in beautiful and zen-like form. However, when it is all said and done, I’ll bet those who watch and adore remember this for the amazing skydiving scenes; the second and final one in particular. I’ve never had an inclination to dive in the sky, but it is impossible not to feel alive during the climax. Escapism at its best. Also not to be be forgotten is a well-framed chase that transitions from wheels to feet, a tense and prolonged robbery, and a shootout that is surprisingly dark in a movie that is—overall—pretty light. despite the R rating. From about 30 minutes on, Point Break doesn’t leave the viewer without some thrill for too long.

Many have said that Keanu Reeves is best as an actor in motion, and I’d agree. When he’s getting physical and/or using his body, the guy is legit. When he’s forced to stand idle and deliver lines, the results can be a little more mixed, ranging from mediocre to laughable. I’d go with the latter here. That doesn’t mean he was the wrong choice. Whether by intent or accident (I sometimes can never tell with Reeves), it is hard to imagine this with someone else, and that may be a positive. But, his chemistry with Lori Petty, nothing more than a romantic damsel in distress, is kind of meh.

Utah may be the protagonist, but Bodhi, played by Swayze, is first billed for a reason. Bodhi is the one that draws in Johnny, and the audience. He’s charismatic, mysterious, villainous, yet somehow respectable and relatable even to the most risk-averse individual. In a movie full of funny lines, Gary Busey may be the most quotable, and makes a sound veteran-rookie team with Reeves. 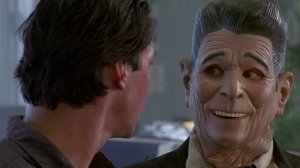 Quotable, light, and exhilarating at times, Point Break may be a bit dated, but is still an entertaining watch now. The tagline really does sum this up: 100% pure adrenaline.