The Boogeyman would have never let this happen. It is Father’s Day weekend, and familyman Evan Webber (Keanu Reeves), is all alone. Due to being behind on work, he cannot join his wife and children on a weekend excursion to the beach. It is what it is, though, as the solace gives him the opportunity to complete his architecture project, indulge in some alcohol, and smoke some reefer.

It all goes to plan until a Knock Knock emits from the front door. On the step stands two young ladies, Genesis (Lorenza Izzo), and Bel (Ana de Armas), soaking wet and cold from the torrential downpour as a result of a wrong address to a party. Evan, the nice guy he is, invites them into his home, gets them dry, and even requests an Uber, which will take 45 minutes to arrive. In that 45 minutes, he begins to find the ladies super open about their sexual conquests, and what they would like to partake in with Evan. Very reluctant originally, he soon gives into the ménage à trois, but finds the next day that it’s the worst decision he could have possibly made. 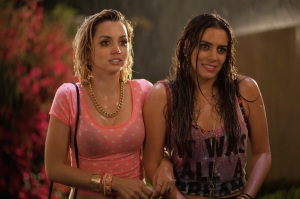 To be honest, yours truly has never been a big fan of Eli Roth (Cabin Fever, Hostel). I cannot say that I’ve seen every film he’s ever directed, but the gore, gore, gore, and more GORE! approach he brings to the table is usually more revolting than frightening. I expected the same with Knock Knock, which drew me in its basic, but interesting, premise. The good thing? Knock Knock strays far away from the buckets of blood style that Roth has made a name on. The bad thing? Knock Knock isn’t that much better in quality than some of those other Roth-helmed flicks. But, it is more entertaining from a pure viewing standpoint.

Knock Knock is a remake of a 70’s film called Death Game. I’ve never viewed that, but to put it in modern terms, this is essentially No Good Deed meets Wild Things. It doesn’t take too long to get into the crux of the story, and it is the foreplay—err, build—before the mid-movie climax that Roth and screenplay writer Nicolas Lopez get right. There’s a real patience in getting to the big event that has to be commended, and it is generally fun to see Evan continue to duck and sidestep, both literally and figuratively, the advances of the women.

Where the movie becomes a little messy is from the second half on. The tone becomes hard to decipher; it wants to be both a comedy and a horror/thriller. Thematically, there’s a feeling Roth wants to say something profound about marriage, infidelity, social media in today’s world, and privacy, but it never comes together in a clear way. Probably because the characters never feel like real people; especially the antagonists, who are extremely unbelievable, yet seemingly are capable of doing everything. They are flat out irritating, instead of being disturbing.

Perhaps the biggest black mark on the story is an effort to justify that Keanu Reeves’ character deserves the scenario he finds himself in. It would be one thing to show that Evan is fundamentally a bad guy, or reveal more layers that could justify his punishment, but the character here is, for all intents and purposes, a good guy who simply makes a mistake. But, the movie draws him as being bad and 100% responsible for everything that occurs.

However, Knock Knock is an entertaining view in parts due to the below-average dialogue and Keanu Reeves. People generally don’t talk like the people present here, but a hoot can be had to hear them spew the lines Roth and Lopez have written. As alluded to earlier, the women are grating rather than something to fear, and worse yet, they are painted as masterminds with no real motive or smarts.

As for Reeves, it’s hard to tell whether he turns in a bad performance, or is in on the joke. Evidence for both sides exists, but it does look like he is having fun with this role, especially as the movie goes on. There’s something about the way he emotes (or lack thereof) in various moments of distress, and he has a few rants that are absolutely gutbusting; think of The Wicker Man with a maybe a touch more self-awareness from its lead. This flick will have tons of life on Netflix and in YouTube clips.

Knock Knock is designed to be the start of a new period in Roth’s career, far from the visceral works he has made a name on. It is more of a trashy comedic joke than a truly thrilling and disturbing film, but it is a semi-memorable one that works well over during a rainy night, some alcoholic drinks and pizza. If you can get free pizza while viewing, even better. That last line will make sense after a watch!

Photo credits go to geekyrant.com, onehundredlunatics.com, and teaser-trailer.com. Last hyperlink in final paragraph goes to a piece at Grantland.com authored by Steven Hyden.