Space…never…cooperates. On a routine manned mission to the Red Planet, a violent storm forces a NASA crew to evacuate quickly. During the evacuation, botanist Mark Watney (Matt Damon) is separated from the rest of his crew as a result of a large piece of flying debris. The impact with which it strikes him with is believed to be fatal, and despite Commander Lewis’ (Jessica Chastain) desire to find Watney, her crew convinces her to come back to the evacuating ship.

Back on Earth, NASA is certain Watney is dead, and even announce so in a press conference. But back on Mars, he’s not exactly well, but alive. He’s becoming The Martian, using any and all of his brainpower to last long enough for the next manned mission to come to Mars. Will it work? Is it even worth the effort on NASA’s part? Can someone just find a wormhole to make things easier? 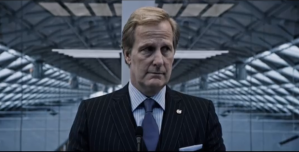 Who says all movies in space have to be completely doom-ey and gloomy and overly heavy? Certainly not Ridley Scott. Look at The Martian and it is darn near impossible not to think about that other movie directed by Christopher Nolan. But, the two don’t really share much in common aside from NASA. Hell, The Martian hardly ever spends that much time in the actual entity of space! Whereas something like Interstellar was more rooted in the fear, resignation, and depressing aspects of the galaxy on more of a macro level, The Martian’s focus is micro, focusing on the individual and finding resolve and optimism in a trying scenario.

By no means does that mean that the movie is all happy-go-lucky. Space is still shown to be a dangerous place. But, it is also a place in where a person with a positive attitude can navigate through. By that analysis, The Martian should satisfy people who like science fiction with a little less pronounced focus on the science. The best phrase to describe it would be “audience friendly,” as stated in Mark Hobin’s review. In my opinion, it lacks a little bit of the unpredictable and thematic drama that some space exploration movies possess. Perhaps this is something that exists in the novel, but lost in translation on the silver screen.

But, the real reason why Ridley Scott’s big screen adaptation of the novel works so well is the fact that there is so much fun to be had in simply watching Watney make due with anything and everything to make it another day, week, year, and years. Yours truly may be a prisoner of the recent moment, but it is hard to remember when was the last time a film had a character not only incredibly smart, but incredibly resourceful and heady.

Matt Damon does a great job of, while still being an amazingly intelligent guy, playing a man who really feel likes an everyman. He’s not brooding, but instead upbeat and hopeful. He experiences worry, but is never consumed by it. When he talks science, it is put in a way that the audience can understand, which makes him an easier guy to connect with. Though easy to see where his tale ultimately ends, it is the journey in getting there that is the real story.

Damon is clearly the sole focus and does most of the heavy lifting, but due to the mega-starpower cast assembled around him, he isn’t as alone as Watney is. Chiwetel Ejiofor can pretty much blend into any role at this point and make it notable, which he does here. Jeff Daniels starts out as a character who looks to be the basic “guy-in-a-suit” stock character, and in many respects he is, but his character is revealed to be pretty realistic and not as antagonistic as to be believed. Jessica Chastain, Michael Peña, Sebastian Stan, Kate Mara, Kristen Wiig, Aksel Hennie, Sean Bean, and Donald Glover are all notable names that may have small parts, but add to the Watney story one way or another. 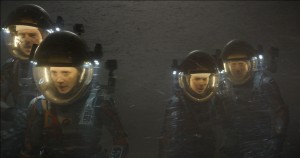 Always one to be known for some directorial flair, Scott makes his imprint here once again. The first shots on Mars are extremely photorealistic, with lighting that looks as if it were shot on the Red Planet itself. Particularly, the climax is as dizzying (in a good way) as anything in recent memory. He gets a nice assist from composer Harry Gregson-Williams, whose score snaps perfectly into the movie during comedic moments and more serious moments, never being more than it needs to be.

The genre of science fiction almost in some ways feels a little like a misnomer for The Martian. There appears to be nothing too fictional about the science, as NASA had involvement on both the novel and the film. Strip away the setting, and this story is one that could be told across many genres, and it has. But that isn’t a negative by any means. In a genre that can be so devoid of hope  and optimism, it’s a pleasant welcome for this galaxy to have it.

13 thoughts on “The Martian”