“Nature has an order…a power to restore balance.”

The King of the Monsters is back, and of course it is none other than Gojira himself, known to us Westerners as Godzilla. This 2014 iteration starts by giving immediate backstory through opening credits to the impending situation at hand. The year is 1954, and as par for the course, no one ever knows what the military and government are up to. In this case, they are actively testing and detonating weapons of immense nuclear power. As one can expect, these fools know not of what they have created/awakened.

Fast forward to the party of 1999 (Prince reference), and a couple of scientists are asked to investigate an oddity in a quarry. Something looks to have hatched, and it looks pretty massive. Shortly after, seismic activity is recorded outside of Tokyo, and mayhem ensues. This is the type of stuff engineer Joe Brody (Bryan Cranston) deals with daily, but nothing can prepare him for this. Unfortunate happenings arise for everyone involved.

15 years later, Joe’s son Ford (Aaron Taylor-Johnson), is making a life with a family in San Francisco as a Naval officer. His father, still in Japan, is hell bent on finding whatever truly happened those years ago. Whatever did happen, it will force the pair to come together, for it is still out there and just a small indication of what is to come. 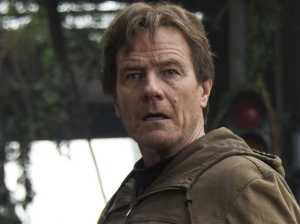 It is best to go into Godzilla with as little knowledge as possible. My knowledge was limited to what I had seen in TV spots, and as a result I was a bit uncertain on where this film would be going. After viewing, my reservations were largely alleviated, and this latest update to the legendary monster is all in all an extremely enjoyable ride. At the very least, this is miles better than the 1998 effort.

With that said, some will simply enjoy the 2014 effort more so than others. This statement really can apply to any movie, but it fits perfectly here. Divisive may be too strong of a descriptor in my opinion, but the way the movie is carried out will most likely diminish the enjoyment for a substantial populace.

For a blockbuster, this is a pretty methodical take. Like a point guard with high basketball IQ, Godzilla knows when to pick its spots. Sometimes, that means going at a breakneck yet still controlled clip, and other times that means slowing the game (movie) down. In totality, I enjoyed this unexpected progression, but there was a short period in the middle where it could have benefited by a quicker pace.

Though the movie’s name is Godzilla, the focus is not squarely on the creature. He (she?) is left off the screen in a physical sense for a sizable amount of the runtime, but the presence and aura of the beast is always prevalent. So even when we don’t see Godzilla, we still feel it. Undoubtedly, some people will dislike this aspect, but it really wasn’t an issue. When it finally arises from obscurity, it makes it all the more memorable, since the anticipation was climbing.

As alluded to earlier, the pace is slower than anticipated, due to the attention it spends on its main characters, who are not monsters. Before something even remotely big occurs, we as an audience get a long look into the lives of a few of them, namely Cranston’s and Johnson’s. It is a thorough build, and one that makes you care about them and what they become subject to, even if they are not inherently interesting characters, if that makes sense.

Out of the two, Joe Brody has more depth, and Cranston works his magic like one would expect. His screentime is reduced however, but he seizes every minute of it. As for Ford Brody, portrayed by Aaron Taylor-Johnson, he is a bit more predictable and unimpressive. I am a fan of ATJ, and feel that he has a lot of potential, but here his performance is average. Part of that may just be due to the character itself, which is your standard persevere-and-show-little-emotion type of solider, but still there were moments that ATJ could have injected more oomph to Ford, but it never really happens. It is a serviceable performance, but on a lesser note from his Kick-Ass and Savages roles.

Other important characters include Elizabeth Olsen as Ford’s wife Elle, and Ken Watanabe as Dr. Serizawa. The former, similar to Johnson, is serviceable but not given much to do. The latter serves as the sage of sorts who is there to inform the characters and the audience what they are dealing with, and why. The early goings pointed to a larger role, but ultimately lead to a side supporter. But, he does have a very funny moment when serving up the origins of “Gojira.”

From a visual and technical standpoint, not many this summer are going to look better than this. Cinematography alone makes this worth a view. The design of the title character is wonderfully on point, and looks highly detailed from head to tail. A true testament to how far CGI has come. Luckily, director Gareth Edwards is able to harness a real sense of scale with the impressive creature design and attention to detail. All of the desolation and devastation is captured to its full extent, and he seems to know when to pull out, pan, linger, etc. through various shots. The sound and score adds to the sense of scale as well, and it is recommended to see this in the best theater possible.

Godzilla in many ways truly signals the arrival of summer movie viewing. Grand, bold, and full of mayhem, even with some slight missteps. A true monstrous start to the blockbuster season.