To know the ending, one must understand the prequel. The present life story for Adrienne (Sienna Miller) and Matteo (Diego Luna) is in a bumpy place. They are new parents, with a new home. Their love is evident, and so too are their troubles with one another which bind the two to the past and not to the future.

A traumatic incident forever changes how Adrienne and Matteo interact. More importantly, it forces the two to confront their deepest fears and insecurities. Only by doing this will they avoid being in a relationship that is forever destined to be stuck in quicksand.

Wander Darkly…sounds more like a horror movie, right? This movie is anything but, and it manages to offer somewhat of a different approach to what would normally be a standard romantic drama. However, the ultimate mileage one gets out of this could boil down to their general appreciation for a love story that can lean heavily into sappy sentimentality.

Handling both the script and the direction is Tara Miele. The direction is by far the aspect to be most discussed upon release. Wander Darkly is very avant garde with how it shows its story play out. Nonlinearity is not of interest to Miele, and it takes a little time to get adjusted to this fact. In a normal film in this story ilk, some combination of flashbacks and simple A-B conversation that brings ups past skeletons/wrongdoings (think Marriage Story) is the path typically taken. 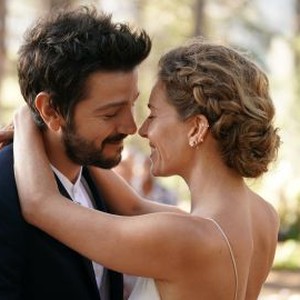 Wander Darkly is a love story examining all the big and small moments adding up to how Adrienne and Matteo arrived at the crisis point in their relationship. In other words, it is overarching, and there is no other way to tell their tale outside of the way Miele directs it. This may be seen as a flashback dependent movie, but the direction and editing courtesy of Tamara Meem and Alex O’Flinn is so seamless and unbroken when Adrienne and Matteo discuss their pasts that labeling it so feels wrong. At the snap of a finger, Miele’s scenes transition from a kitchen to a rooftop party and back without being clunky.

Miele’s film comes from a deeply personal place, herself dealing with a similar incident and trauma the two lead characters experience. To avoid spoilers, the lack of explanation in the infinite scenario isn’t too annoying, if only because it is immediately clear there is no definitive “why” theory–this is not that type of feature. Where Wander Darkly loses its hook is about two-thirds through. To say the film is without a central conflict wouldn’t be accurate, but stretches exists where the narrative seemingly is stuck in neutral. Additionally, the final reveal is fairly easy to read making the final 10-15 minutes rather mechanical leading to the real tear jerker.

Nevertheless, romances live and die with the chemistry/performances of the actors moonlighting as a couple, and Miller alongside Luna play their roles well. Miller is someone who is rarely in a flat out bad movie, and always capable of playing off of anyone (see: Bradley Cooper twice and Chadwick Boseman). It isn’t often she gets to be the lead, but she’s taken through the ringer in Wander Darkly and showcases spectacular range from utter instability to subtle snarkiness. Luna—he too typically cast as a supporting character only—provides a grounding presence through an irregular journey.

Predominately led by a unique direction and strong lead work, Wander Darkly essentially arrives at an endpoint that isn’t too different than the usual romantic film. Still, there is more than enough present for big genre fans to appreciate deeply.