Rules. Who needs them? Scream does. Wes Craven’s first three movies in his second-biggest franchise made their name on being in the know with what does and doesn’t fly for audiences and in-movie characters. And then came Scream 4…or Scre4m if one is so inclined. Approaching ten years after its release, has it become better?

THE STORY: Nearly ten years have passed since Sidney Prescott (Neve Campbell) survived another attack on her life by a Ghostface killer—someone who always has a connection to her. In the years since, she has become a successful author, using her real-life account into stellar book sales.

The tour Sidney is on has her stopping where it all began in Woodsboro. Unbeknownst to her, two young high school females were just murdered a day earlier by…a Ghostface killer, swiftly ending her promotion and rendering her a suspect after incriminating evidence is found in her vehicle. It is happening again, and like the first time, Sidney and the now married couple of Gale Weathers-Riley (Courteney Cox) and Dewey Riley (David Arquette) have no choice but to hop back into the deep end, not only to save each other, but Jill Roberts (Emma Roberts), one of Sidney’s few remaining surviving family members.

WHAT TO LOOK FOR: The horror world Scream 4 returned to in 2011 was quite different from the one it found itself in when Scream 3 concluded in 2000. In those eleven years, two default template norms ruled the day. Save for a minority few, horrors were typically Saw, Hostel, or in that gross-out goreno vein, or were deliberately low budget utilizing the found footage approach like Paranormal Activity. The traditional slasher was out of style by the time Scream 4 arrived, and while it shows at times, few if any directors could get the life out of a fourth movie like Craven did.

Craven had made some of his career on being the most meta guy in the room, and that certainly didn’t stop in Scream 4, which ended up being his final work. What became of the horror genre circa 2000 is played up in one of the most amazingly hilarious and clever ways during the first 5-7 minutes of runtime, featuring Lucy Hale, Shenae Grimes, Kristen Bell, and Anna Paquin. In a few scenes, everyone being in on the joke pushes Scream 4 dangerously close to Scary Movie (most specifically a scene with Anthony Anderson front and center loses intensity by way of its cringey execution), but more times than not, Craven juggles being smart while wringing as much tension and general old-school horror moments as he can. Credit of course goes to him along with his longtime Scream-writing (pun intended) collaborator Kevin Williamson. Though Williamson had a bumpy experience with the movie (rewrites happened to varying levels), his influences are very evident, from the dialogue to the whodunit aspect.

Similar to 2018’s rebooted Halloween, Scream 4 has the same deficiency as that movie, being that slashers are nowhere near as chilling as they once were, and I have doubts on whether a modern slasher movie can truly be unnerving in the 21st century. Society evolves, and with it, so do tastes and what makes us scared. Even with all of that, Craven could have phoned it in, but Scream 4 is never devoid of energy behind the camera or in front of it. Series stalwarts Campbell, Cox, and Arquette once again hold phenomenal chemistry with each other, not only having fun but creating an actual care to see their characters survive.

A GREAT MOMENT: Perfectly understandable to go with the Stab 6 & 7 scene, but let’s keep this confined to events in the actual film. It must be the killer in the closet moment. After the first Ghostface killing, anyone connected to Sidney and Jill is put on surveillance. What do teen girls and neighbors do on lockdown? Talk on the phone. Jill and Kirby (a really good Hayden Panettiere) are watching a scary movie at Jill’s place as they talk on the phone with Olivia (Marielle Jaffe). They can all see each other. Their three-way becomes an unanticipated four way when Ghostface—initially thought to be Jill’s ex, Trevor (Nico Tortorella)–comes on the line. The sarcastic tone quickly becomes menacing, and the playful tone Kirby and Jill start with turns to uncertainty and dread when its clear Ghostface knows what the two are watching in Shaun of the Dead.

Ghostface taunts Kirby by telling her to open the closet because he’s there waiting to slice someone open. Kirby approaches Jill’s closet. She opens the door, and nothing. Kirby deduces he’s lying, until Ghostface drops the haymaker of “I never said I was in your closet.” A look across to the room Olivia is in finds the ghoul-faced killer bursting out of hiding, viciously assaulting her, and bringing the young woman’s life to a grisly end.

This is undoubtedly the most gruesome death of the entire franchise, and yet, what makes it special is not necessarily the focus on the violence, but the aftermath. Craven shows just enough action shots but there’s never a gratuitous 15-20 second shot of “how.” This creates a small jaw-dropping moment when Sidney, trying desperately to save Olivia, is too late and she’s only left with a blood soaked room coating the walls and a disemboweled Olivia. For a horror trope staple of the killer being in the closet, this scene has no right to be as awesome as it is. 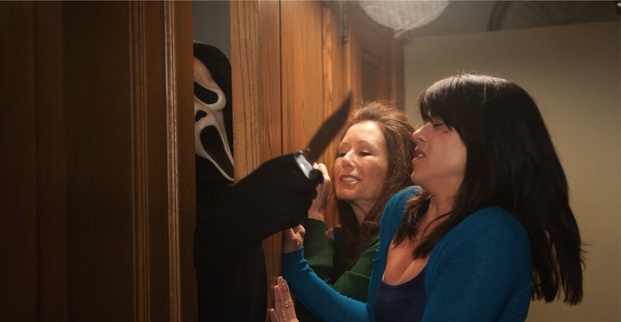 THE TALLY: Against all odds, Scream 4 managed to be for its time an entertaining, modernized take on the state of the horror genre. And more than a decade later, the franchise finds itself gearing up for another installment in 2022. With horror never being in a more diverse, genre-melding place, the opportunity is there to simultaneously pay homage to and pick apart. Scream 4 is What to Watch, and the impending Scream 5 is what to look forward to.

One thought on “What to Watch: Scream 4”