The spirit is willing to do a lot of things when the flesh is nonexistent. Brilliant biologist Doctor Sebastian Caine (Kevin Bacon) is furiously at work attempting to crack the formula for invisibility and re-visibility that would be used for the U.S. military. Alongside his lab team, which includes scientist—and ex-girlfriend—Linda (Elizabeth Shue) and researcher Matt (Josh Brolin), they’ve got something brewing. A testing breakthrough on a gorilla is successful, albeit somewhat unstable.

But ticking time is ticking tine, and the grant money Sebastian and team have been gifted will be revoked if there isn’t something more substantial than making a gorilla disappear and reappear, or worse, the military will take credit for everything he did. Regardless, desperate times call for desperate measures, and the Dr. makes the desperate decision to test invisibility on himself. It works swimmingly, except for the reversal. The side effects are markedly pronounced, and the longer Dr. Caine is a “Hollow Man,” the higher his instability and irritability becomes… 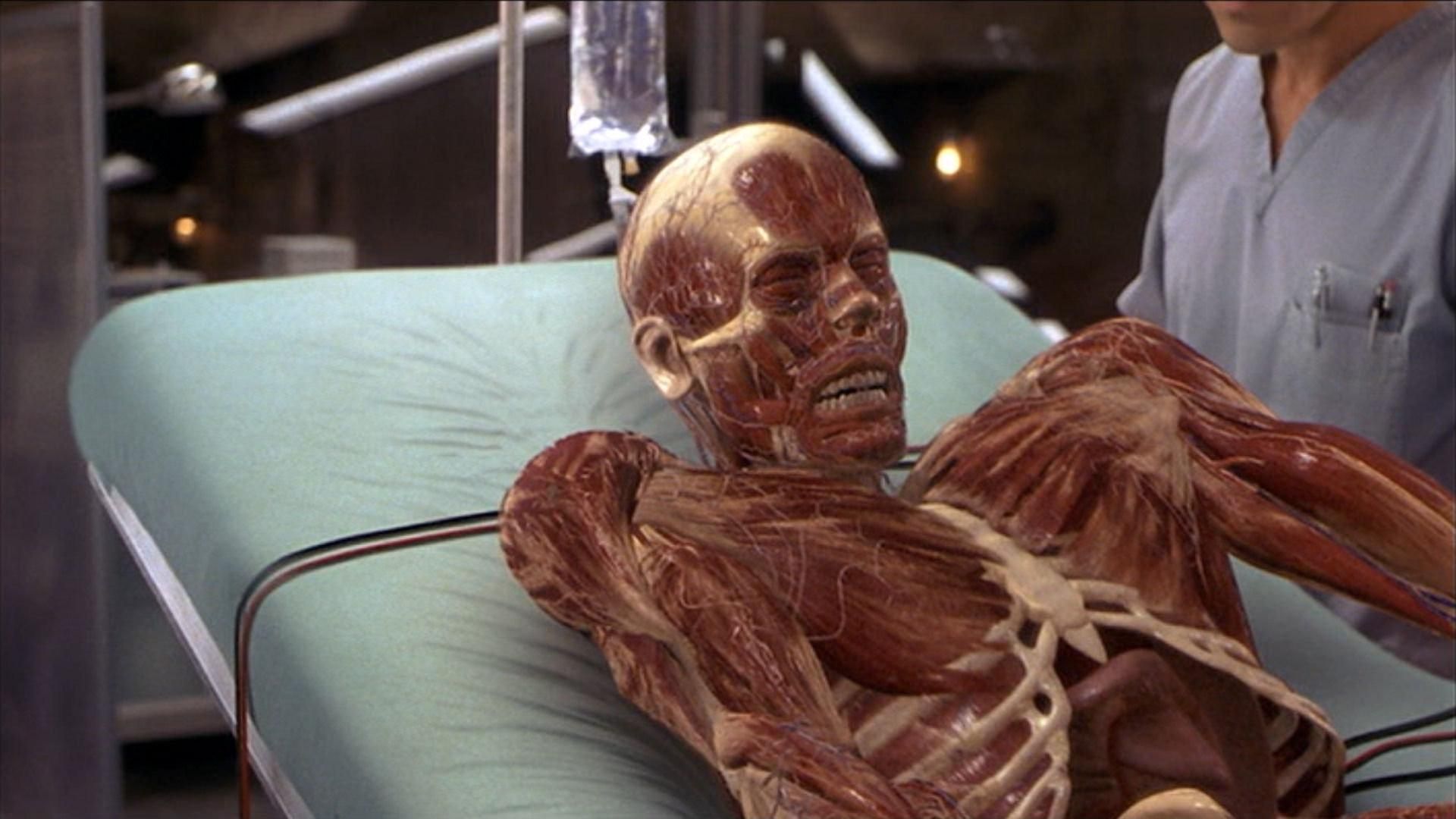 Death, taxes, and constant Hollywood remakes/reimaginings. Those are unequivocal certainties in life, pertaining particularly to the latter (and as I write this, there’s a quasi reboot/sequel of last decade’s Planet of the Apes trilogy coming down the pike). With that said, some intellectual properties being retold are long overdue, even welcome. Can you believe that since 1933, there’s only been one legitimate stab at presenting author H.G. Wells’ legendary novel The Invisible Man to the silver screen? That movie being Hollow Man, which is less content with posing science questions and moral quandaries than it is with creating a mildly entertaining slasher movie.

Who knew that 20 years later, Hollow Man would stand as Paul Verhoeven’s last directed movie to get a wide U.S. release? From RoboCop to Showgirls and everything in between and coming after, if there’s one thing that can unequivocally be said about the Dutch filmmaker, it’s that good or bad, his movies are at least memorable to some extent no matter the spectrum they end up on. For Hollow Man, what Verhoeven and longtime cinematographer partner Jost Vacano create using technology is, honestly, probably worth the watch alone. No matter how effective or ineffective the movie is, or what it does or doesn’t do, it works on a baseline level simply because the eyes convince the mind that what a person is viewing is a guy who became invisible. There’s not a noticeable instance where the events on-screen are shoddy, outside of the end where it feels like budget ran out. This was nominated for Best Visual Effects at the Oscars for a reason and features a few creative set-pieces in its house-of-horrors-like final act.

A common complaint of Hollow Man is the idea that it was positioned as a heady sci-fi with some horror elements. Hate to sound condescending, but the ten-year-old MMJ saw the trailer way back when and immediately knew this had aims on being more scary than scientific and philosophical. The fact that Hollow Man is predominately a horror isn’t that much of a disappointment (the latex mask that Sebastian eventually sports is a clear aesthetic nod to Michael Myers), it’s what they do with the run-time preceding this shift that is.

Stronger writing from Gary Scott Thompson and Andrew W. Marlowe would have sold the disintegration of Dr. Crane’s psyche better, creating a more well-rounded character in possession of multiple layers rather than only one. That layer that does exist is nothing but an abrupt turn from egomaniac to sex-crazed maniac who’s only aim is to pull disturbing “pranks” and commit atrocious acts against the opposite sex. No exaggeration, Hollow Man is undeniably one of the most rapiest movies of all time, laden with bizarre humor attempts and a sort of whimsically titillating nature that stands in contrast to actions that occur.

Though the progression from clever smart-ass to a conduit of cruelty isn’t as paced as well as it should be, Bacon does his best to sell it as Dr. Crane. It’s a charismatic, unhinged performance that relies on the vocals more so than anything traditional, not unlike an animated film. His supporting cast is mostly relegated to eventual forgettable fodder, including a stiff Shue and a not-quite-there-yet Brolin. 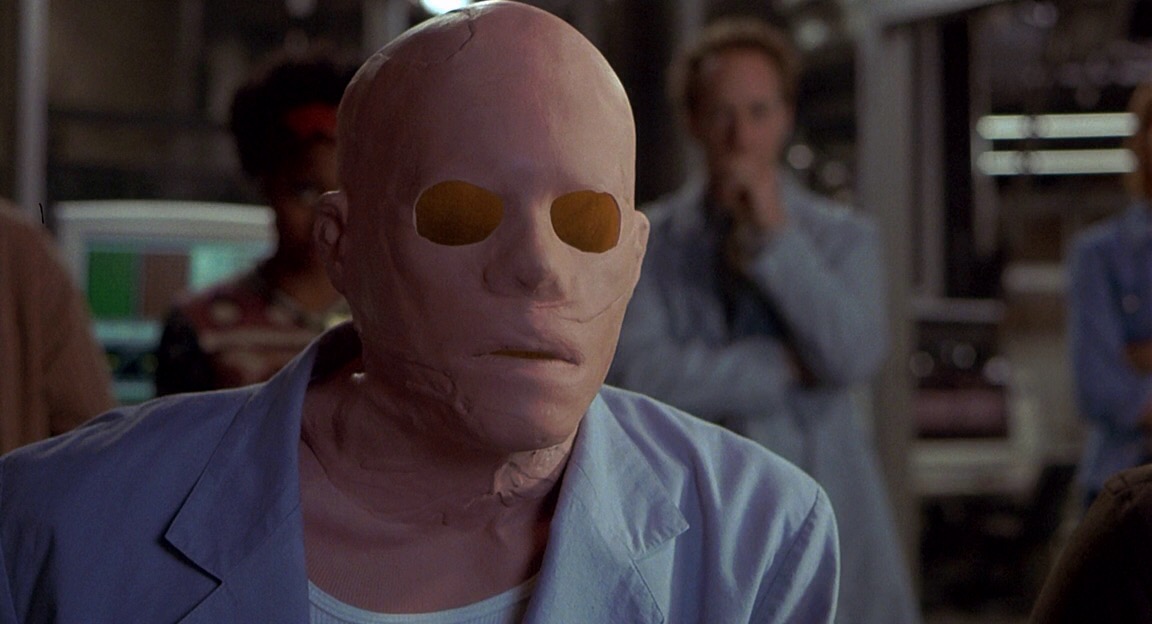 Hollow Man is one of those flicks that you can’t fault anyone for flat out hating. Hell, even Verhoeven has disowned it.  However, if one can get past the problematic treatment of certain matters, there’s a film that’s difficult to disregard completely, helped by really good direction and an on-point Bacon. But it’s time for an update, and Leigh Whannell is on the shortlist of directors who can make The Invisible Man truly compelling, even frightening.

One thought on “Hollow Man”