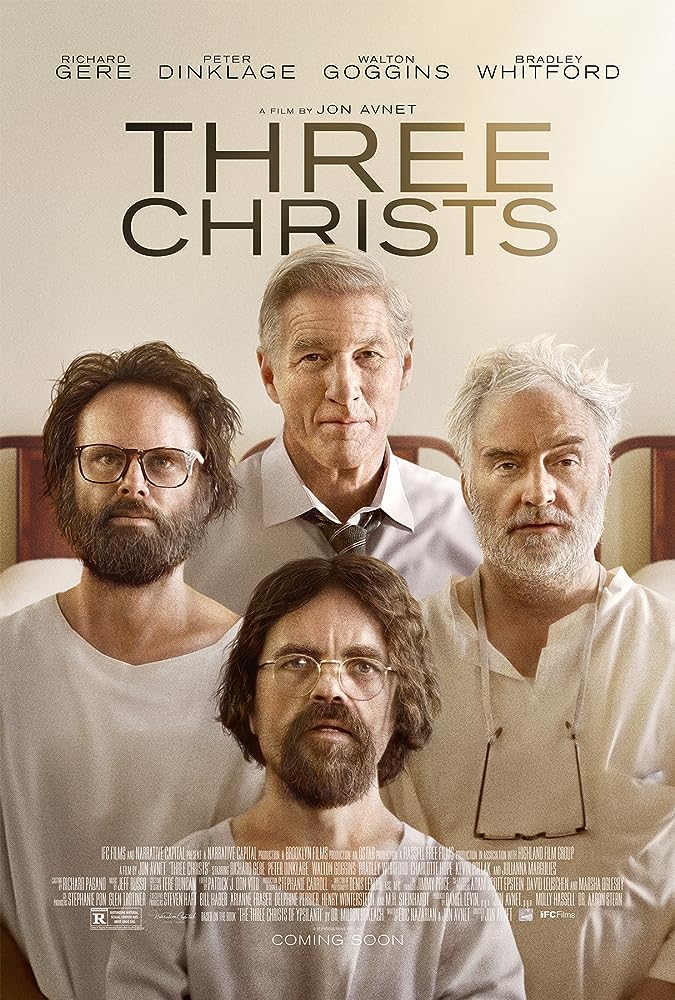 Is it possible to really understand someone else’s delusions? Doctor Alan Stone (Richard Gere) believes it’s possible. He simply wants to make a difference. So much so, that he’s left his Psychology professor teaching post to provide good-natured assistance to Ypsilanti, Michigan State Mental Hospital; specifically, to those who suffer from paranoid schizophrenia. Immediately, he comes across an interesting patient, one Joseph (Peter Dinklage), a Brit who fancies himself as Jesus Christ and will not entertain being referred to by any other name.

And yet, that’s only the beginning of it. Shortly after his Joseph encounter, Dr. Stone finds out about Clyde (Bradley Whitford) and Leon (Walton Goggins), who also fancy themselves as the Messiah. The state’s approach to these and similar patients is to shock them, with no regard for their well-being. With shock therapy being ineffective, it would be insane to do it over and over again and expect different results. What’s the harm in putting these Three Christs together to work out their complexes civilly led by Stone? Based semi-loosely off Psychiatrist Dr. Milton Rokeach’s published case study, The Three Christs of Ypsilanti, Three Christs the movie sure is something…as well as nothing. Something, by sheer fact of the unique names that comprise the cast, and nothing, because it really doesn’t go anywhere, nor does it manage to provoke the emotions it desperately aims for.

Debuting in September of 2017 at Toronto International Film Festival, it’s obviously taken some time for this movie to be released “wide” (this is mostly getting the VOD treatment with a light roll out in independent theaters), and flash-dropping it in January effectively says all that needs to be said. Jon Avnet is credited as director, his recent work predominately coming from television, and it’s the first thing one notices about Three Christs. From editing to lighting, the movie resembles something seen readily on Lifetime or Hallmark as opposed to the silver screen. That in itself doesn’t make for an entire movie, but it is easy to imagine the movie with a higher level of flair and intrigue with someone significantly more accomplished.

Avnet is also responsible for the script alongside Eric Nazarian, but one quickly finds that the case study probably isn’t the best piece of psychology to translate onto film. What made this story the story to tell? It doesn’t offer anything substantial to the ongoing discussion of mental health that Joker posed/at least attempted to pose. The best thing Three Christs does on a narrative perspective is shed an unfocused light on the treatment of mentally ill people, which absolutely should continue to be examined in the present day.

There are moments played for rightful laughs; the situation itself is inherently amusing despite its touchy subject matter and the poster would seem to know this. However, the film is hard to take seriously in the final act, an abrupt pivot to all-out stirring drama from muted dark comedy (an intrusive score courtesy of Jeff Russo doesn’t help). Throw in a needless scene of intercourse, a love triangle between Alan, wife Ruth (Julianna Margulies), and Alan’s research assistant, Becky (Charlotte Hope), along with the skirting pertaining to methods Dr. Stone used to get results, and Three Christs quickly shows itself to be a lot of nothing.

Nevertheless, it’s not completely nothing. Rarely do films put eclectic, off-center thespians at the center of their productions, and seeing the Holy Trinity of Dinklage, Whitford, and Goggins guarantees a few brief moments of viewing entertainment. All sell the idea of insanity to scaling degrees per their estimated prognosis for recovery (Dinklage’s character is closest to release, Whitford’s is the furthest away). But they’re let down by nonexistent character writing, as well as little-to-no chemistry with Gere, already on the early ballot for “Sleepiest Performance of the Year.” His Dr. Stone is revealed to be the central figure of analysis, a bad thing because he’s uninteresting to follow.

Three Christs is not funny enough to be a quirky comedy, not moving enough to be a touching drama, and not informational enough to be a teaching tool. Insanity is doing the same thing over and over again and expecting different results. Releasing this movie roughly 2.5 years after it was intended qualifies as such, too.