You think it’s a game?! Game Night isn’t just a night for Max (Jason Bateman) and Annie (Rachel McAdams), it is a religion; a way of life if you will. The two met during trivia in college and have been inseparable ever since. They make a great team, hosting game night once a week with neighborhood friends Michelle (Kylie Bunbury) and Kevin (Lamone Morris), Ryan (Billy Magnussen), and his revolving woman of the week; this time Sarah (Sharon Horgan).

But this week’s game night is a tad bit different. Reason being, Max’s brother, the better-in-every-way Brooks (Kyle Chandler) is in town for business and upstages the night. Wanting to make it up to Max, he ups the ante the following week, opting for a violent mystery of sorts involving himself that looks so real it couldn’t possibly be faked…right? Only the clues left behind are going to provide any information as to whether this is a game and what isn’t.

2017 was a bad year on many fronts. It was a downright deplorable year in the feature comedy genre, with every quasi-competent comedy immediately followed by an infinite number of duds. I say with enthusiasm that Game Night sets off the 2018 comedy genre on a solid right foot, providing that all-important counter-programming option that makes for a healthy Hollywood.

After breathing their own life last year into a genre that can feel staid story-wise at times with Spider-Man: Homecoming, longtime writers Jonathan Goldstein and John Frances Daley reunite to direct their first pure comedy since 2015’s Vacation. That movie gets a little of a bad rap, but this go-around, their efforts do feel fresh and original in an R-rated comedy genre that too can feel more staid than the superhero one. While not credited for the writing of Game Night (that falls to Mark Perez), it’s hard to imagine that the duo did not contribute something to this script.

The writing on showcase here differs from most R-rated fare, not so reliant on pervasive profanity, gross-out humor/nudity, or joke-to-joke writing with no propelling narrative momentum once said joke ends. At times, it can feel like it’s moving a little too fast with the jokes and dialogue, and one running gag revolving around a celebrity goes a long while. But still, there are much more hits than misses, and the comedy is supported by strong lead character writing that gives substantial heart to the characters Bateman and McAdams oversee. Game Night has some sizable laughs, but better than that; there’s consistent laughs, akin to a game of Jenga, consistently building upon itself but thankfully never toppling over. 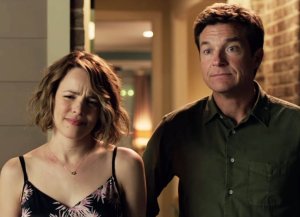 Even from a production standpoint, Game Night stands out with great lighting and scene composition, with a “hot potato/capture-the-flag”-like sequence that is not only a riot but shot impressively. Composer Cliff Martinez gives the film a little bit of an edge as well with a 16-bit synth-heavy score  It bears repeating, though, that the story actually flows instead of being fragmented, surprising considering there are twists upon twists into twists.

Know how sometimes you can tell immediately when people are going to be amazing together? That happens in the first few minutes of this movie in an awesome montage scene with Jason Bateman and Rachel McAdams. Their chemistry sells much of the film’s over-the-top moments but their believably as an adorable married couple with their own set of problems provides Game Night with true heart. Bateman is a known commodity in the realm of comedy, and he rarely disappoints with his brand of dry, deadpan humor. But McAdams truly shines in her first real comedy role since Mean Girls, matching Bateman delivery-wise and going the extra mile with physical humor.

They’re awesome, and yet they may not even be the best characters in the movie. That mantle might fall to Jesse Plemons, delivering laughs in spades as the policeman neighbor of Bateman and McAdams who only wants to be invited to game night again. Other supporting characters don’t have a lot of meat, but do contribute every now and then to a fun time, such as the playing-against-type Kyle Chandler, the New Girl-esque Lamone Morris, or the dumb-as-rocks-yet-still-somewhat smart Billy Magnussen. Regardless, all come together to make for a fun cast that sells their group aspect wonderfully.