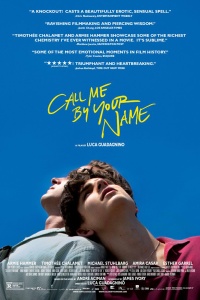 Nothing is as sweet as a peach, or your first love. The summer of 1983 brings Elio Perlman (Timothée Chalamet) something he’s never felt before. Seventeen-year-old Elio lives in Italy with his parents, spending the days immersing himself into classical music. Each summer brings a different person into Elio’s home, because his father, Professor Perlman (Michael Stuhlbarg) works as a professor and needs the help during the period to prep and research. The youngster has grown to accept this, even if it means giving up his room consistently.

But this summer is different. Twenty-four year-old Oliver (Armie Hammer) is the scholar this year, and a magnetism quickly draws Elio to him. And it doesn’t happen overnight, but it is a thing—a spark—that keeps on building and building, whether at the meal table, out for a swim, or biking along the countryside. Six weeks is a short amount of time, but in ways, it’s a lifetime.

Seeing Italy as the setting for a romance is nothing new. Outside of Paris, France, it’s pretty much the country of love. After viewing Call Me By Your Name, however, no romance has tapped into its environment more than director Luca Guadagnino (I Am Love, A Bigger Splash). The environment, as much as the masterful acting work, cements Call Me By Your Name as a requisite watch for not only romance lovers, but any film nuts.

For as great as the acting work is, Call Me By Your Name will be remembered for the locale. Filmed on location, there’s an immense level of warmth felt from the get-go and the opening titles. It’s natural and inviting; one can damn near feel the morning sun and the nighttime breeze in every respective scene. Alluring is the word, and Guadagnino’s intentionally distanced direction, along with a beautiful score and soundtrack by Sufjan Stevens, makes his film stand as an impressive production.

Perhaps the most interesting aspect of Call Me By Your Name is how methodically patient it plays out. Sure, at times it can be a little too slowly paced with nothing of real importance occurring, but nonetheless, unique to see a romance unfurl with the speed of a tortoise and still be compelling. And the unfurling occurs without real conflict. While it would have been nice to see some significant impediments to the budding union and some more meat on these character, this is not how the novel was written by author André Aciman. Not only is it cool to see a mostly intended vision (by most accounts) upheld, there’s a simple yet nice message that love can sort of exist separately as its own entity. Narrative-wise, this isn’t a groundbreaking romantic story, but it is still well-told.

What is groundbreaking happens to be the lead performance of Timothée Chalamet. He dives into the part with so much assuredness. His part is obviously not easy, not only due to the occasional explicitness, but for how he’s got to portray emotion while not being outwardly emotive. Not much more can be said about his work that hasn’t already been said. Not the forgotten-but-still-second-fiddle is Armie Hammer, equal parts mysterious, charismatic, and quirky. On their own, the work would still be great but probably a little empty.

Together, it’s electric seeing the opposite personalities recognize their key differences but being totally unable to stay away from one another. This is very much a two person movie, three if the setting is included (and it should be), though Michael Stuhlbarg, continuing his torrid streak of buzzworthy movies since 2015, chews some scenery and absolutely is in possession of the feature’s most emotionally resonant moment.

More than enough for technical aficionados or those who just love their romantic movies, Call Me By Your Name is a sweet and succulent viewing. Bite in.