Those best laid plans go to the wayside when each of their moms come in ahead of schedule to complicate matters even further. There’s Amy’s mother (Christine Baranski), the perfectionist, Kiki’s mother (Cheryl Hines), the suffocator, and Carla’s mother (Susan Sarandon), the deadbeat. To take Christmas back, the three younger mothers need to be the strong women they are and stand up to the ones that birthed them into this world.

It’s easy to see why one wouldn’t necessarily be excited at the prospect of A Bad Moms Christmas, the sequel to last year’s surprise hit Bad Moms. The state of recent affairs as it pertains to mid-to-big budget comedies over the past few years isn’t exactly a laughing matter. And there’s the whole sequel aspect that many movies—especially comedies (looking at you, Dumb and Dumber To, Zoolander 2, and Hot Tub Time Machine 2) —drop the ball on. It’s with surprise, then, that A Bad Moms Christmas is the rare comedy sequel that is on par with and possibly better than the first.

Co-directors and writers Jon Lucas and Scott Moore return to direct the mothers finding themselves under immense stress again. Bad Moms rightfully tapped into an audience that was underrepresented in a movie-going audience, and achieved in becoming a sleeper hit. But intentional or not, it did feel a little too narrow on the four-quadrant movie scale. Not so with A Bad Moms Christmas. The broadening of scope to the holiday season generally makes for a more enjoyable time and an easier connection for a wider viewership, as we’ve all been there—mothers, fathers, sons, daughters, grandmas, and grandparents—experiencing the stresses of the St. Nick season. While not for all ages, it’s easy to see this becoming a staple in Christmas rotations and top 10 Christmas movie lists. 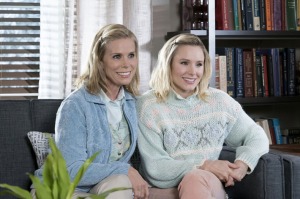 A Bad Moms Xmas is kind of dark. Not dark in a dark comedy sense (the vulgarity is doubled this time, for better and for worse), but thematically, tackling parenting issues of negligence, perfection, and attachment and seeing how these pressures can manifest down to the next generation of parents in a family. Some of it is forced, but this does give a little more emotion and depth to the storyline on this go-around. As for more heavy negatives, “Bad Moms 2” shares some of those common ones found in the modern R comedy, namely an over-reliance on montages, being vulgar for vulgar’s sake, and a runtime that runs long in the final act.

But overall, A Bad Moms Christmas delivers more than not on what it’s designed to do: Make an audience laugh. That is somewhat attributed to the returning threesome of Kunis, Bell, and Hahn, clearly having fun to the point where they seem to be legitimately laughing during the back-and-forth between their characters. But, they, along with everyone else, happen to be honestly overshadowed by the “Golden Girl” trio of Cheryl Hines, Susan Sarandon, and Christine Baranski in what happens to be amazing casting. Hines is gloriously twisted from the get-go, and Baranski has moment upon moment of excellent lines and running jokes delivered to stoic perfection. Of the three, Sarandon’s character is the distant third as Hahn’s mom, “Isis,” a little too mean-spirited to earn consistent humor as Hines and Baranski do, but nonetheless, at least she’s not in Tammy.

Whether a product of very disappointing big comedies or low expectations equated to sequel-itis, it comes as a surprise that A Bad Moms Christmas is not only competent but actually worth some real hearty laughs. Joy to the (comedy) world.

3 thoughts on “A Bad Moms Christmas”