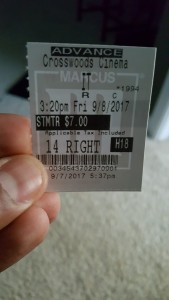 Tears of a clown? More like fears of a clown. The town of Derry, Maine is a quite a peculiar one. People disappear at six times the normal national average, and that’s just adults. For kids, it’s worse—way—worse. No one knows why. The latest child to go missing is Georgie Denbrough (Jackson Robert Scott), brother of Bill (Jaeden Lieberher).

Everyone around him, friends included, assumes he’s dead. Bill refuses to stop looking, and goes all in during the summer to figure out what happened. Along with Richie (Finn Wolfhard), Eddie (Jack Dylan Grazer), Stanley (Wyatt Oleff), Ben (Jeremy Ray Taylor), Beverly (Sophia Lillis), and Mike (Chosen Jacobs), “The Losers Club” begins to witness firsthand what is going on in Derry. What they witness is some all-powerful presence known commonly as “Pennywise the Clown” (Bill Skarsgård) that feeds off children that can morph into anything IT wants to, by gaining power from those who experience fear. Standing no chance alone of defeating it, the club will have to stick together to overcome this entity.

IT has been a long time coming, literally and figuratively. The re-imagining of the original 1990 feature was in development hell for an eternity, suffering through casting and directing defections before finally getting everything in place for a 2017 release, ironically 27 years after. Figuratively speaking, while there’s certainly been a few smaller good movies over the last month and a half, nothing since Dunkirk has truly been a must-watch go see event. IT is the shot-in-the-arm the box office needs; short of a flawless horror but one worthy of praise.

You’ve got to start with Pennywise, right? The version that appears here is very much different than the one in 1990. No one’s going to call Tim Curry’s rendition mediocre because it wasn’t; but the gifs have been seen and immortalized and looking at it now, IT 1990 is a little bit campy. Bill Skarsgård’s rendition is much more menacing. He makes the killer clown, instead of the killer clown and all of the get-up making him.

And as a whole, this new IT is simply darker. Pennywise is the main attraction, but the mature themes and implied happenings are arguably more darker and unsettling than any jump scares or things the dancing clown can conjure up. There feels as if there’s a missed opportunity to go deeper into the source material and Stephen King’s novel lore (the town, why people can’t see certain things, etc.), but the execution of the story as is makes for a solid one; sort of a mash up of Stranger Things meets Stand By Me and John Hughes movies with a smattering of blood and gore.

For a film that runs at 2 hours and 15 minutes, director Andy Muschietti (Mama) rarely loses pace, save for a rushed stretch in the early middle that calls for almost every child to experience IT. Muschietti sets up the tone immediately, crafting an unforgettable opening scene with help from composer Benjamin Wallfisch that is essentially the original yet undoubtedly improves upon it. Many of his scenes make a lasting impression, utilizing great lighting and positioning to create the desired effect. Not all is perfect, though. Muschietti hooks his audience quickly and doesn’t let go, but IT reaches its peak around 30 minutes to go, making for a climax that isn’t as chilling as what came before. Part of that is due to the mediocre—sometimes shoddy—CGI that dilutes the experience.

What doesn’t dilute the experience is the overall impressive efforts of the adolescent cast that makes up The Losers Club. Some performances individually are more buoyant than others, but this is a movie that leans more on the collective chemistry and even levity (there’s much of it) of the group rather than particular standouts. To that end, each of the seven performers make the viewer care about the group, and by associative property, the viewer cares about them as individuals surviving this horror.

IT is event-viewing, steered by confident and passionate direction and a great cast. We’ll just have to wait and see if Chapter II can float, too.