What will Unforgettable teach a person? Have a Facebook account, Twitter account, something. For Julia Banks (Rosario Dawson), everything seems to be fitting into place. She’s just taken the next step in her editorial career, moving to the sunny West Coast. Her personal life couldn’t be any better, finally meeting the man of her dreams, David (Geoff Stults), and set to be a stepmom to his daughter, Lily (Isabella Kai Rice).

Julia has an unfortunate past that she’s managed to put behind her. If only others, such as David’s ex-wife Tessa (Katherine Heigl) could possess her resolve. Instead, Tessa seems consumed with trying to win David back and disparage his new flame (often subtly) at every opportunity. This suburbia ain’t big enough for the three of them. 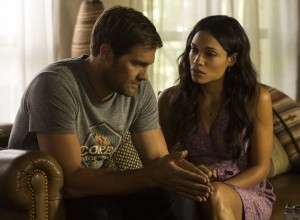 As I’ve stated before, one of my guilty pleasure film subgenres is that of the psycholover-ex thriller variety. Most never do reach the heights of, say Fatal Attraction or Play Misty for Me, but they can be—sometimes—enjoyable and ridiculous diversions. Well, except for The Boy Next Door, and now, Unforgettable.

There’s an unofficial theory that yours truly has subscribed to when it comes to what makes these types of these movies successful, or at least worthy enough of a Saturday afternoon Oxygen/Lifetime view. It all comes down to the individual playing the antagonist, and how adept they are at playing crazy. Are they easy to buy as being bonkers? Do they find that early movie sweet spot where there’s something just a bit off about them, but still feel enough like a real person and not a caricature?

Being the antagonist in Unforgettable, this pressure falls unto Katherine Heigl to make this fun and…ahem…unforgettable. Sadly, she will not get a gold star for her work here. Not all of the failure in making this enjoyable falls at her feet, as some of the dialogue is tough for any actress to deliver confidently. But for most of the runtime, Heigl comes off more as a spoiled, privileged, word that rhymes with “witch” as opposed to a terrifying psychopath. And she does nothing memorable to try to be dynamic.

As a result, Unforgettable quickly becomes a dull affair with the typical moments befitting a film like this, with the only slight difference in storytelling being an in media res start from first-time feature director Denise Di Novi (producer of Edward Scissorhands and Crazy.Stupid.Love). It would be one thing if the movie and/or some of its stars recognized some of its schlock and just went with it (à la The Perfect Guy and Michael Ealy), but everything is played so rigid one does wonder the point of its existence.

It’s a shame to see Rosario Dawson in such a tepid production. Still, she manages to play her role as best as she can, providing an adequate protagonist to get behind with a little bit of interesting character backstory. Her chemistry with Geoff Stults is fine, Stults being the average man who is laughably oblivious to just how insane his ex is. There’s the occasionally amusing line from comedian Whitney Cummings, but by and large, characters do and say exactly what you think they would, which gives everything a overly mechanical feeling.

What does Unforgettable even mean in the context of this film? Not sure, but outside of it, it’s a horrid title. Even removing the “un” and calling this Forgettable is probably being too nice.