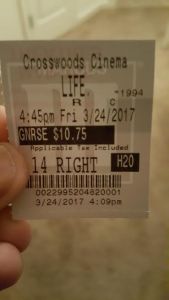 Let’s have the rapper Big K.R.I.T tell the people what he has to say about life. All aboard the International Space Station resides a crew of six individuals. In their space exploration, the crew recovers a probe from the planet Mars. This probe ends up containing extraterrestrial Life.

Tests show that this tiny organism—dubbed “Calvin”—is multi-celled, reacting to stimuli quickly and evolving rapidly. However, a specific test ends up making Calvin “aggressive” in ways that cannot be believed. With the crew’s safety compromised, they have to contain the threat and eliminate it before coming back to Terra firma. Good luck.

With the arrival of Life in theaters, I think we’ve officially reached peaked space disaster survival movie levels, if we haven’t already. They’ve always been present, but, pun intended, they always felt spaced out release date-wise from one another. From Gravity to Interstellar to The Martian to Europa Report to Passengers, all may be slightly different in the questions they pose to audiences (sometimes, none), but they are kind of the same when boiled down to the core. This is a way of saying Life has some solid good thrills and chills, good direction, and yet is still sort of underwhelming.

All of those aforementioned films are survival films to an extent, but Life, directed by Daniel Espinosa (Safe House), carries a noticeable horror lean, which slightly separates it from its like minded brethren, even if ever so slightly. Taking cues from Alien, Espinosa creates palpable tension and a real feeling of isolation once s*** officially hits the fan. It’s a good looking movie overall, too, incorporating much more CGI than anticipated, but it blending seamlessly with the real-life cast. Some moments truly do stand out.

Generally speaking, yours truly likes his sci-fi to be thought-provoking, and raise a question or two. In the case of Life, that sadly never happens. Scriptwriters Rhett Reese and Paul Wernick opt for the extremely conventional route here, settling into a (I hate this phrase, but it applies) by-the-numbers affair. Remove the organism, replace it with Jason, and voila! You’ve got Jason X. That’s not to say things aren’t still tense, but more predictable. The ending certainly leaves things open to more installments, though the prospects of this happening with the projected box office are slim to none at the moment.

Life boats three big name leads to carry matters, and they all do relatively good work despite being pretty flimsy. At times here, the great Jake Gyllenhaal looks like he’s sleepwalking through the proceedings, as a result of not having much to latch onto from a character perspective. But he, like all of the cast, still sells the fear that arises in being in space on a derelict ship with an unpredictable entity effectively.

This is a film that doesn’t concern itself with character information, just the scenario its characters find themselves in. The highlight of the movie is easily Ryan Reynolds, who brings levity to the situation without undermining it (in addition to having the most memorable scene). All of the cast members feel right at home as doctors and crew members in space, which does a lot for the believability aspect. Don’t expect to connect with any, though.

The fact of Life? It generates a passable pulse, taking similar jolts from other films to make a competent, if unspectacular, horror in outer space.

One thought on “Life”