Shamone!  In Gotham City, of course, resides Bruce Wayne, aka Batman (Will Arnett). As he’s done for the past 78 or so years, the Caped Crusader defends his city from all of its evil-doers, most notably The Joker (Zach Galifianakis). Despite always “beating” Joker and the rest of Gotham’s criminal denizens, Batman has never fully eradicated, or lessened the city’s crime.

Perhaps it’s because he always works alone. When new police commissioner Barbara Gordon proposes a plan to reduce crime that involves Batman working with the community, he balks. But as The Joker crafts a plan to unleash all of Gotham’s worst at once (and command R-E-S-P-E-C-T) from Batman, The Dark Knight may have to learn how to work together with a team to save the day again.

Deadpool for a PG-crowd? Not entirely, but The Lego Batman Movie does share some of the same self-referential tone that last year’s movie possessed, not taking itself too seriously and making light of comic book conventions, often to hilarious levels. Heck, it even features fourth-wall breaking beginning and end credit sequences. Overall, it’s a whimsical and all-ages pleasing type of watch.

Lego Batman not only captures all ages, but almost all fans who fall on every notch on the spectrum as it pertains to comic book enjoyment. Sure, the understanding of some jokes and visual shots here and there may lend themselves better to those who are immaculate in their Batman lore, but one doesn’t necessarily have to be a Batman fan to have a good time with this movie. The jokes fly fast, sometimes too fast to completely digest and take appreciation in, but that also means that little time goes by without someone laughing in the audience, lest yourself. 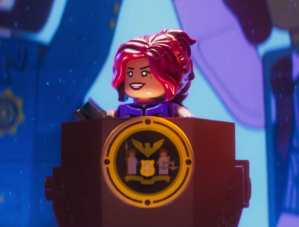 From a story perspective, The LEGO Batman Movie comes off as the inverse of the movie that preceded it. If The LEGO Movie was ultimately about embracing individuality in a philosophical way, LEGO Batman Movie addresses the importance of teamwork and collaboration using Batman’s immense backstory to often amusing effect. Not a particularly fresh story, but few mainstream animation movies really are. The story gets the job done, but feels like it was written around jokes for a large portion of it. For the first and final acts, Batman’s full foray into Lego Land rarely bogs down, but a fairly significant portion in the middle of the movie does.

Still, the film is a visual treat to look at, even during slow periods. It actually is a notch under the impressiveness that was 2014’s LEGO Movie, if only because the color palette is a little darker (duh) and we’ve now seen it before. But consistency is important, and Chris McKay, animation co-director of the previous film, makes sure that the stop-motion continues to look fluid.

Stealing the show before as a side character, Will Arnett and Batman return as the feature character this go around, with an actual arc. Arnett gives stellar delivery at all times, never missing a beat. This is important, because the rest of the cast isn’t all consistent. Zach Galifianakis isn’t a bad Joker, and Ellie Kemper is memorable in a bit part. Ralph Fiennes is marvelous as Alfred. But some of the other important characters in Robin (Michael Cera) and Barbara Gordon (Rosario Dawson) are a little disappointing. Feels like a missed opportunity to have some notable star power powering the vocals of the other key characters.

5 thoughts on “The LEGO Batman Movie”