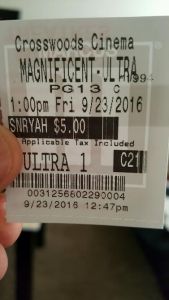 Sometimes it takes an army. Other times, it takes only seven people. Some time in the 1870’s, the town of Rose Creek is under hostile takeover. Industrial businessman Bartholomew Bogue (Peter Sarsgaard) is interesting in mining the town for gold. He gives the residents two choices: Either accept his payment of $20 per acre, or die trying to defend it.

The season of fall officially began Thursday, September 22nd for the northern hemisphere. The season of fall began for Hollywood a couple of weeks ago. However, at least out here in Columbus, Ohio, summer doesn’t feel like it has left yet, weather-wise. And for a little over two hours, The Magnificent Seven makes one feel like we’re still in blockbuster season. In a point almost certain to be made in a lot of positive reviews, The Magnificent Seven is one of the movies summer 2016 needed.

Doesn’t mean it is flawless, but darn entertaining. I didn’t expect anything less from director Antoine Fuqua (The Equalizer, Olympus Has Fallen). His movies, sans Training Day, may lack substantial substance but he’s always had a great eye and hand behind the camera. That doesn’t change here. The Western setting is fully realized, from the garb to the firearms to the alcohol. And when the quick draw action and prolonged gunfights goes down, it is thrilling, with the high point being a PG-13 limit-pushing climax where no one is safe. The Magnificent Seven 2016 absolutely benefits with today’s camerawork.

This isn’t a shot-for-shot remake (thankfully), and even calling it a remake is somewhat misleading. But this is the retelling of a story that will probably always be retold every 40-50 years. That is to say that the story written by True Detective showrunner Nic Pizzolatto and Richard Wenk follows the same beats as the 1960 and 1954 version, with a little more lightness and surprisingly good humor during the quieter moments. Putting it under a modern comparison, Fast Five (especially with the diversity aspect) and The Avengers come to mind, without the lore those movies afforded themselves as franchises.

Don’t go expecting to be blown away by any characters. A few have some interesting backstories that are briefly hit on, but by and large the actors are being seen and not the characters they portray. It’s not a bad thing, if only because everyone is having such a great time. Each member of the seven gets time to shine, some brighter than others. Denzel is a great lead as Chisolm, believable as the one guy who could get this group to work cohesively. He’s got some connection to the film’s main villain, played well by Sarsgaard. I think the finale could have had more emotional punch if their connection and why Chisolm is driven to take down Bogue was revealed earlier, however.

Hawke is good, even if his character’s struggles are only briefly touched upon. Though this is obviously a different movie, there’s something awesome about seeing him in scenes again with Washington 15 years later. D’Onofrio is easily the oddest of the bunch, yet lays a claim for being the most memorable as well. This film could be the vehicle to launch lesser stars like Manuel Garcia-Rulfo, Martin Sensmeier, and Byung-hun Lee into more prominent positions in Hollywood. Chris Pratt’s already in a prominent position, and he’s just a engaging personality here. 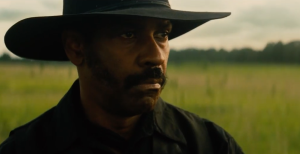 Is the Western making a comeback? That remains to be seen, but The Magnificent Seven certainly could be an ignition starter. Anyone hankering for a traditional and explosive jaunt into the Old Frontier will find it here.