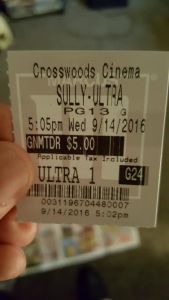 Everything is unprecedented until it happens for the first time. On January 15th, 2009, flight Captain Chelsey “Sully” Sullenberger (Tom Hanks) and his First Officer Jeff Skiles (Aaron Eckhart) have the unprecedented arrive mid-flight in the skies. Their plane completely fails electrically after a flock of birds comes into contact with the engines. This isn’t going to end well.

Miraculously, Sully, the pilot vet with over 40 years of experience, thinks on his feet and manages to land right in the middle of the Hudson river, with no casualties whatsoever. Despite his humility and claim to just be doing his job, he’s a hero and should be treated as such. Yet, everyone doesn’t see it that way. The National Transportation Safety Board maintains through diagnostics that there was enough power to return back to the airport, and aim to show that Sully was more reckless than heroic in those 208 seconds from system failure to water landing.

Instead of working with longtime collaborator Steven Spielberg, Tom Hanks links up for the first time with director Clint Eastwood to tell the tale of one man’s duty to those around him. In Sully’s mind, he isn’t doing the heroic thing, he’s simply doing the dutiful thing and the right thing. It would have been really easy for the movie to come off as overly committed to romanticizing a man and painting him in an unbelievable soft and perfect light (a criticism many had with Eastwood’s last feature in American Sniper), but Eastwood commits to simplicity and a streamlined approach. Some may consider the flashbacks to the harrowing event a bit much; I found the piecewise flashbacks handled well with clarity (could have done without the military one, possibly). In a genre that can sometimes contain bloated screenplays and overlong runtimes, Sully is brisk and refreshing, clocking in at a tick over 90 minutes.

Charles Barkley would love Sully. Why is he mentioned here? It was in February of 2015 that the “Sir Charles” went on a rant about how analytics were the result of people who had never played basketball using numbers to tell people how the game should be played and coached. Eastwood uses Sully to show the craziness of an overnight celebrity in the 21st century, but it ultimately is a story about man versus machine. No matter what the numbers or statistics may say or dictate, there is nothing like the human element which has to process a multitude of scenarios in real-time while actually being a human.

The finest aspects of Sully may be the technical ones, however. While at least half of the movie doesn’t “pop” in IMAX, the other half is pretty immersive, and as harrowing as one could imagine in that situation for all involved. But it is the little things that add to the immersion, like the establishing shots of the Hudson, or the interior of the aircraft. In particular, the sound is impeccable. A musical score is present, but nonexistent for the sequences in the plane. It’s a great artistic choice; hearing the malfunctions in the cockpit and the chant of “Brace brace brace! Heads down, stay down!” do more than any piece of music could do. This film’s sound design isn’t the type of feature that gets nominated in the respective award categories, but it should be.

What more is there to be said about Hanks at this point? His work is so effortless that it appears like he’s hardly trying. I think it is just the heightened quality level Hanks operates at. He forms one of the best, if not the best, bromances of 2016 sharing the skies with Aaron Eckhart, who provides a nice level of humor that does not undercut anything. Laura Linney adds a little to Sully’s character as his stressed-out wife. If there were somewhat of a substantial flaw with Sully, it would have to be its antagonists in the form of the NTSB officials. Their refusal to see anything past the data and what the flight simulations show (hard not to chuckle a bit at how much screentime those sims get during the end investigation) becomes sort of comical and eye-rolling by the film’s end.

To call Sully extraordinary may be a reach, but seeing a hero’s tale handled so deftly and with such precision is great stuff. Eastwood flies pretty high with this one.