Every dog has its day. David Packouz (Miles Teller) hasn’t had his yet. He’s a college dropout who massages Miami’s biggest clientele (which sounds better than it seems), and a failing entrepreneur who hitched his wagon attempting to sell blankets to unneedy retirement homes. Cash flow is sparse, and he’s going to need more of it with a baby on the way from his girlfriend, Iz (Ana de Armas).

Just at the right time, his old best friend Efraim Diveroli (Jonah Hill) returns to the cocaine capital, doing very well for himself. Efraim has gotten into the arms dealing business, bidding on U.S. military contracts to supply wartime squadrons. He’s a one man operation, but needs another guy to get this operation humming. David makes the decision to work with Efraim, eating off of the crumbs that other guys brush off to the side. Before you know it, the duo are rolling in dough, and taking on progressively bigger, and progressively more dangerous and unethical, contracts.

An evolution, in any arena of life, rarely happens overnight. Rather, it is gradual and incremental. While striking out with some, possibly most, comedies here and there, director Todd Phillips has helmed some of the more memorable ones of the 21st century in The Hangover and Old School. His latest in War Dogs still retains some of the style that those movies had, but also is a tad more serious. Though not flawless, the final product indicates that there is some real potential for Phillips to tackle something really substantial down the line.

Even in Hollywood where many biographies take liberties, War Dogs takes the cake and might as well be an original screenplay. Okay, not exactly, but it is clearly less about the facts and more about the “unfathomable-ness” of the whole ordeal. Hell, it doesn’t carry the requisite character facts at the end of a feature that accompany so many biographies! Perhaps any real emotional impact or stabs at political commentary is lost, but looked at as another story of how the largest American dreams are often seized by the people who lack morality the least, War Dogs works just fine script-wise. 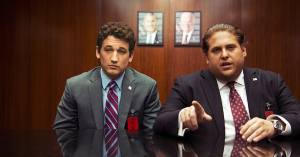 For the most part, Phillips paces War Dogs well, moving at an efficient clip. The narration done by Teller’s character is a nice addition, the cultivated soundtrack fits nicely at the right times, and the visual direction approaches fourth-wall breaks without going all of the way there. It is only at the end where the movie begins to drag on the inevitable fallout and consequences, and the last 15-25 minutes become very elongated. Again, Phillips sort of struggles with the resonating aspect of the film. Unlike, say, The Big Short which really stuck with me personally a few days/weeks after viewing, despite Phillips’ best efforts, War Dogs never comes close to leaving an emotional imprint.

But who cares about emotions when what is being viewed is constantly entertaining? Credit really goes to the cast. It would be fair to call Miles Teller a little dry and dull in this one, but it works perfectly for who he plays off of, and near the end he does have some great dramatic moments. Ana de Armas is just begging to be unleashed in the right role; her housewife isn’t though she does what she can with it. Bradley Cooper adds more name value than anything, but he actually appears interested to be in a Phillips production again, and his character is a big part of the movie. With more screentime, he really would have left a mark.

But undoubtedly, “fat” Jonah Hill (because there is a difference between the rotund version and the svelte version) makes War Dogs worth remembering. He goes all in as his Efraim character, and imbues the events on screen with an infectiousness that is hard not to appreciate and fall for, just like the many he comes across in the movie do. Teller is certainly important here, but Jonah Hill is first billed for a reason. As much as this may seem to be a buddy movie, this is purely Jonah’s vehicle for the first time in his career.

War Dogs never truly hits introspectively or emotionally, and yet it is pretty intriguing from beginning to end. Tasty crumbs. Anyone else feel like this is going to be a staple on HBO for years and years?