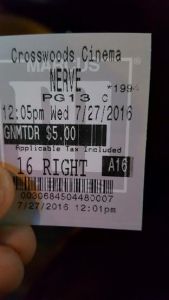 Wu-Tang clang ain’t nothing to f*** with. Neither is Nerve. Nerve is a truth or dare game for the 21st century, played over a digital landscape. Everyone who participates has a hand in the game, either as a watcher, or an active player. The watchers give dares to the players, who earn money for successfully completing dares in the alloted time. As the potential reward becomes more sizable, each dare becomes progressively harder and more dangerous.

For soon to be high school college graduate Vee (Emma Roberts), she’s a spectator in life, one who plays it safe in comparison to her best friend, Sydney (Emily Meade). But after a bad day, she decides to become a player in Nerve, and actually garners a big following playing with fellow player Ian (Dave Franco) in a short amount of time. The cash return is immediate, but each stunt becomes worse, and attempting to leave the game apparently isn’t an option. Nerve is no longer a game, its real life for everyone to see. 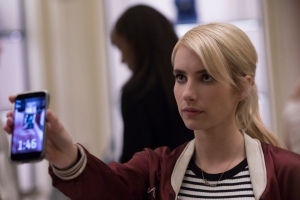 Nerve is a silver screen adaptation from a young adult novel with the same name. Watching Nerve and its plot premise might invoke feelings of Déjà vu. Seriously, this has elements of Cheap Thrills, The Purge, The Hunger Games, Gamer, Unfriended, and even Mr. Robot, just to name a few. All this goes without saying that Nerve isn’t remarkable, but to use a generic phrase, it is better than it has any right to be.

Word of caution. Nerve is very “poppy,” a movie that caters most to teenyboppers and young girls, especially. Expect a lot of top 50, techno, and EDM songs from the start to the end of it. Honestly, it can be a little grating at times. Sonically, one might love this or hate it. Stylistically, directors Ariel Schulman and Henry Joost (Catfish, Paranormal Activity 3) give the film a futuristic, hyperspeed feeling where everything and everyone is dialed into their devices 24/7. Phones are used as directorial devices, occasionally to a disorienting degree, but I believe it adds to the digitized feeling overall. The neon lighting that permeates many of the scenes doesn’t appear to add anything thematically to the production, but at least it adds to the cinematography.

Obviously embellished, still, Nerve takes a look at how easy fame can be obtained in a sort amount of time in today’s day and age, and how much of a high that can be in the right way. But it is more concerned with the negative aspects, like the desperate lengths people will go to get noticed, the way all of our information on social media can come back to haunt us, or to stay unnoticed and assume no responsibility for what happens to others. Yes, the troll culture is addressed here!

It does build to impressive dares…yet loses steam near the end. It kind of goes in that wrap up everything nicely mode, which is a shame because even with the final act missteps and characters performing far-fetched skills and acts, the climax is thrilling, if a bit melodramatic. But instead of showing the aftermath, the film just ends on a cheesy epilogue. Much of this sounds vague, but it may make sense when viewed.

If adults are going to be used to play teenagers/young adults, might as well make sure they can pass. Emma Roberts at 25 doesn’t look a day over 18. Her character arc is small but it does go somewhere, and she does well enough with the dramatic moments. I’m convinced Dave Franco is limited as an actor. His chemistry with Roberts is OK, nothing special. At the end of the day, this isn’t a feature in which anyone shines; actors and actresses fit into sketched roles and are generally fine.

Nerve is likely to click more with its target audience. But even for those who fall outside of its age range, it’s a better than expected YA adaptation in a genre that can often be tough to be a watcher of.