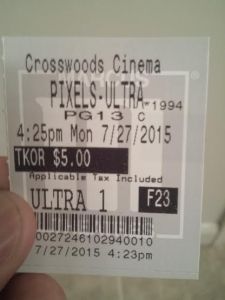 Hardcore gamers are good for something. Back in 1982, the arcade scene is booming, and adolescent friends Sam Brennan, Will Cooper, and Ludlow Lamonsoff (Adam Sandler, Kevin James, Josh Gad) spend many quarters becoming extremely skilled in various games, with Sam becoming an all-around beast in everything. His brilliance leads him to a showdown, one that is most importantly recorded and sent into space, against equally brilliant but arrogant Eddie Plant (Peter Dinklage), to which he loses.

In the present day, Sam makes an unfulfilling living as a technology installer, Ludlow has become a conspiracy theorist, Eddie is behind bars, and Will has somehow become the president of the United States. During that time that the 1982 feed was floating around in space, extraterrestrials have taken this recording as a signal of war, and have decided to send out harbingers in the form of beloved video games characters that kids controlled to eradicate Earth. To protect and save Terra Firma, the only people capable of doing so are the nerds: Brennan, Ludlow, and Plant.

It may be best to use some tenets of what generally makes a modern video game good in an effort to state yours truly’s thoughts on Pixels. Does it have great graphics (cinematography/direction)? A compelling campaign (story)? What type of genre is it, and does it have a definitive audience? How about multiplayer (replay/rewatch value)?

Good news first. Pixels, directed by Chris Columbus (Mrs. Doubtfire, Harry Potter and the Sorcerer’s Stone), gets a high score visually. Even in the increasingly summer-filled CGI features, this does stand out from the rest. Kudos to Columbus and the producers for actually making these widely known video game entities look like they did in the 80’s but in a 2015 world. It probably would have been real easy to not go the pixelated route, but in doing so at least the movie looks unique. Perhaps it is even better in 3D, and even with the film’s fails, it is fun to look at. 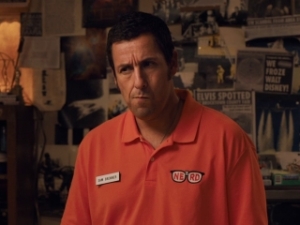 Honestly though, it may be best to watch this movie on the big screen if watched at all. After the visual aspect, which is really enhanced in a theater, there isn’t a ton else to get behind. The inconsistent trailers that came attached in my theater seemed to foreshadow one of the main problems Pixels has: It doesn’t have a true idea on who it is targeting. The movie is light, and with all of the bright colors and cute characters (especially Qbert), youngsters definitely are a target demographic for this. However, most of those youngsters are just too young to get some of the other stuff, the stuff that relies on knowing the 80’s and the ins/outs of the classic video games. A better question may be: Do those youngsters even care about the classics? Probably not.

The biggest indictment on Sandler’s latest is that the humor, no matter what age group is watching, fails badly. Yes, comedy is subjective, but nothing is written to be gut-busting. At best, a few moments elicit a chuckle. At worst, a sigh and an eye roll. When the funniest thing in the movie is the fact that Columbus and the writers determined it to be a good idea to cast Kevin James as the leader of the free world without any explanation, that is an issue.

As easy as it is to bash on Sandler at this point, he has brought it upon himself in recent years, and deserves some of the blame for another recent Sandler-produced project being underwhelming or flat out putrid yet again. So let yours truly hop on the bash train. It is true, Adam in this isn’t as bad as he has been, but by and large he is still the same character that he has been trumpeting out in his productions the last few years. What is most disheartening is that the half-assed performance he submits seems to indicate he doesn’t care.

Where there’s Adam Sandler, there’s Kevin James. I’ve said enough about his role. Outside of one, maybe two kind of funny moments, he is unbelievable as the President, mainly because the film never even tries to explain how he got to be it. Josh Gad is more loudly obnoxious and pathetic than amusing. Peter Dinklage provides the most comedy out of the foursome, but it isn’t much. No matter how dumb and moronic Sandler’s characters are, he always gets a love interest. Michelle Monaghan fills that role and nothing else in this feature.

Reaching the game over portion of this post, Pixels is kind of like the game that boasts some stellar graphics, but little to nothing else. A good game, just like a good film, is more than just looking sharp and having one or two fun levels.